Book Review: The Hotter You Burn by Gena Showalter 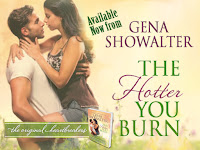 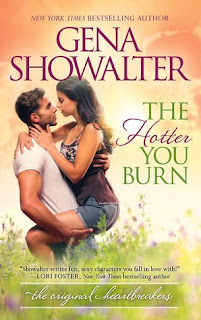 Beck O'ckley is a man who can sweet talk any woman into his bed and leave them wanting more, but he will never give it. He had a rough past and it has caused him to have commitment issues. When he catches a pie thief in his home, he runs after her, only to realize she is the woman who grew up in the home. Attracted to her, Beck knows he wants her in his bed, but he feels something for her that no one has come close to ever making him feel.

Harlow Glass is the most hated woman in town. A former bully, Harlow dished it out to almost every one in town at least once or twice. Now reformed, Harlow is doing the best to hold on to what she can. Homeless and living in a tent on her former land, Harlow meets Beck O'ckley when she breaks into her former home and tries to get away with his pie. A chance meeting between the two turns into something more, but after the disappoints and lack of family Harlow has had, Harlow wants more: commitment, marriage, stability, and family. As attracted as she is to Beck, Harlow knows that he is not the man who can settle down and tries to avoid feelings for Beck at all cost.

The Hotter You Burn is absolutely incredible. I did NOT want to put this book down. Once I began reading, I feel in love with Showalter's wonderful cast of characters. The main characters, Beck and Harlow, are wonderfully written and well defined, and so are the secondary characters for that matter. Jase, West, and Beck have an amazing bromance friendship going on between them, the Three Musketeers type of friendship. Brook Lynn and her sister, Jessie Kay are one of a kind and I'm interested in reading each of their stories. Beck and Harlow though are amazing. I loved each of them so incredibly much.

While I didn't care for the townsfolk's behavior towards Harlow, no matter what she had done in her past, I loved the way Showalter describes the small town of Strawberry Valley and could picture myself amongst the backdrop of the town, blending right in the with the townspeople.

I enjoyed Showalter's writing style, characters, and plot. I never saw that little twist towards the end coming for the life of me. The Hotter You Burn is a great book by a highly talented author. I look forward to reading the rest of this series and more from Showalter.