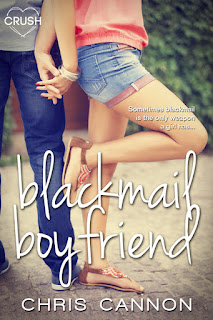 Sometimes, blackmail is the only weapon a girl has…
Haley Patterson has had a crush on golden boy Bryce Colton for ages. But when she hears a rumor that he hooked up with her she gives him a choice: be her boyfriend for a month to show other guys that she’s dateable-despite her overprotective and very intimidating brothers-or deal with the angry, cage-fighting boyfriend of the girl he actually did hook up with.

Bryce didn’t know the other Haley even had a boyfriend. He was just trying to get his ex off his back. And now, not only is he being blackmailed, he’s being blackmailed by an honor student. His new “girlfriend” has two three-legged dogs, her father mows grass at the country club, and she’s…well, difficult. And different.

My Review
Blackmail Boyfriend is an easy read with a cute plot although it was somewhat predictable. The book itself is enjoyable, the characters are likable and can easily be related to and the romance between Bryce and Haley is sweet.

I enjoyed Blackmail Boyfriend and I was able to read it in one sitting because as I mentioned it's an easy one. Cannon's words flow easily through the pages and her character's banter was quite entertaining.

Bryce, a rich kid with a strict father has the most improvement throughout the book as he grows tremendously throughout it. Even though the relationship between Haley and Bryce is fake, he still acts like a proper gentlemen and seems to care about her and wants to get to know her. The progression of Bryce and Haley's relationship was not forced and they were able to build something solid out of something that was unexpected.