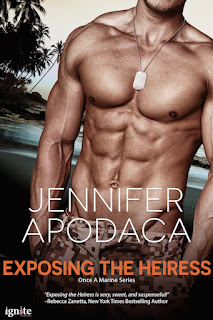 This Marine will protect her at all costs…

When wealthy heiress Alyssa Brooks finds out her stepfather has been paying her fiancé to marry her, she’s humiliated and betrayed. She quickly breaks the engagement, only to be blackmailed by her now ex-fiancé, who threatens both Alyssa and the son she gave up for adoption. With nowhere to go, she turns to the one man she can trust.

Former Marine sniper Hunter Reece’s lethal skills could save Alyssa’s life. But his little sister’s best friend has turned into a woman, who is an irresistible mix of secrets and sexiness. And while Hunter can trust himself to protect her, he can’t trust himself to keep his attraction hidden…or even pretend to be the man that Alyssa remembers.
Because the only way to keep the lovely heiress safe is to become the one thing he knows she could never love…a killer.

What I loved about this book:
-The cover: This is my favorite cover of the Once a Marine series. I love the abs, the colors, and the setting behind the Marine.
-The suspense: Apodaca's books ALWAYS leave me in suspense.
-The heat: Wow, talk about the sizzle factor here. Alyssa and Hunt bring the heat and it's quite scorching!
-The characters: The characters are complex and layered which makes getting to know them so interesting. As the layers were peeled back on each character and I got to know them, I fell in love with them and rooted for them. Both Hunter and Alyssa have their secrets and discovering them made them realer in my eyes.

In the beginning of Exposing the Heiress, innocent and sweet Alyssa is engaged to be married to her fiance, Nate. That is until she overhears her stepfather and Nate about how Nate is being paid to marry Alyssa. Fearing for her life after confronting Nate, Alyssa runs to Hunt seeking protection for herself and the son she gave up for adoption.

Alyssa has an incredible heart and is an amazing character. While at first I believed her to be innocent and naive, I soon saw another side of Alyssa that I loved. She had a genuine heart of gold, carried the weight of the pain of giving away her son, and she's brave and carries a strength even she didn't even know she had. Alyssa is one of my favorite female characters.

Hunt on the other hand is the opposite of Alyssa in every way.  Strong, brave, and protective, Hunt is a tattooed hunk with a tortured past that still haunts him to this day. Hunt knows that Alyssa deserves better than him and that he cannot do relationships, so even though the chemistry between them is noticeable from the very beginning, he tries not to give into it because of the fact he thinks Alyssa deserves more than a tortured Marine.