ARC Review: Blackmailed by the Hero by Julie Particka 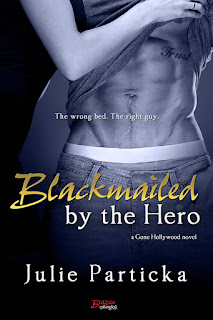 The wrong bed. The wrong guy.

Party planner Vicky Stone is on a post-divorce mission. Not only does she intend to land her dream promotion, she’s going to indulge in a night of hot hook-up sex. Preferably with the hunky actor she just met at a work function, no-fraternization rules be damned. Fortunately, his drunken directions included a right that should have been a left, landing her in bed with her brother’s extra-hot, extra-off-limits best friend instead of the unemployment line.

Bad boy Dante Palladino’s forbidden fantasies are about to come true…until Vicky realizes who she’s feeling up. And to find out she risked her job for sex with some loser? Not on his watch. Dante throws down the ultimate, albeit self-serving, blackmail. Vicky will date him—and only him—and her secret will be safe. But Vicky swore never to fall for another guy who could break her heart…and Dante’s on course to do just that.

My Review
Vicki Stone has two missions for herself: 1. land the promotion she wants and 2. have a hot, hot, hot hook up. As Vicki is working a party where a lot of movie stars are, she gets an offer that is hard to refuse. A handsome actor offers to show Vicki a good night and she can't say no to that.

At the same party that Vicki is working at is Dante, her brother's best friend. Vicki has always had an attraction to him since they meet, but her brother has always warned Vicki away from Dante.

When Vicki sneaks back to the party to meet up with her handsome actor she ends up in the wrong bed and must do whatever it takes to keep her job - including dating Dante and ONLY Dante.

Dante first comes off as quite the bad boy, especially with the blackmailing business, but as the book continues I realized what an absolute sweetheart he is underneath the bad boy layer. The chemistry between Vicki and Dante is very real and the steamy scenes between them heated up the pages.

Blackmailed by the Hero is simple with not a lot of drama going on and the story line is pretty much straight to the point. Needless to say, it was a bit lackluster, but the book is definitely worth a read and I did enjoy the characters and the book itself.