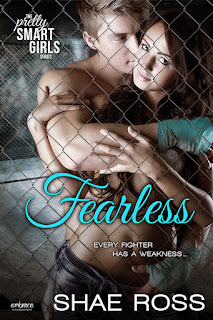 Every fighter has a weakness…

Devi Dalton won’t let anyone hold her back. With the help of her friends, she’s taken control of her future and traded her messed-up family life for a new job in Manhattan. Her only obstacle? Ben Winslow, the sexy friend she’s desperately trying to resist. If she’s going to succeed, she can’t afford to be distracted, no matter how hot the chemistry burns between them.

Cage fighter Ben spent six months trying to convince Devi to take a chance on a relationship. Now that they’ve reunited in New York, he’s not letting her push him away again. They’re more than friends—always have been—and he’ll do whatever it takes to prove it to her. First, he has a few demons of his own to slay…one of which could ruin his chances with her for forever.


But every fighter has a weakness. Ben’s is Devi. And this time, she’ll need more than just her favorite “Fearless Red” lipstick to protect her heart if she lets him in…

My Review
Ben and Devi meet during a competition and become fast friends. Ben wants more, but Devi is wary and hesitant due to her past. Ben has spent the last six months trying to convince Devi to take a chance, but she just won't give in to him.

Devi and Ben are different from one another in the regards that Ben comes from money whereas Devi does not. This is one of her reasons for not getting involved besides her past. Devi is also trying to succeed in life and make a name for herself outside of her messed up family. Therefore she decides that she cannot handle the complications of a relationship because relationships are one of the biggest distractions - no matter how hot Ben might be or the feelings he provokes.

I really liked Ben and Devi and although this book mentions MMA fighting, it isn't a book based solely on that. Ben isn't in the ring a lot of the time and the fighting is mostly just mentions. The book is fun and has some sex appeal to it. There is little drama except some slight angst here and there.

Both Ben and Devi are likable characters as I've mentioned and I genuinely enjoyed reading their story and seeing the relationship between them grow. Shae Ross is a talented author and her words flow easily among the pages.

I would recommend Fearless to other readers.