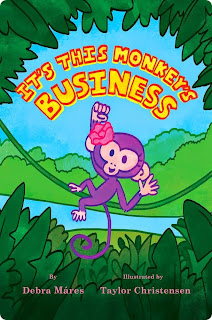 "Cabana," a young spider monkey is brought to life to tell her story It's This Monkey's Business to help children who are affected by domestic violence and divorce. Cabana, who lives with her parents in a treehouse high up in a rainforest canopy, becomes startled one day from her Mama's scream, when she is waiting atop a tree branch for her Papa to teach her how to swing. After falling to the forest floor, Cabana frustrated from her parents' fighting, decides she will search for a new family to be part of. Her persistence is cut short when she braves the river to play with a pink dolphin, unaware she cannot swim. The tragedy brings her parents together to realize they can no longer live together. Cabana reconnects with her Papa, realizing he is the only one that can teach her how to swing.
It's This Monkey's Business is an approximately 756 word children's book targeting ages 4-8, which is set in a rainforest and featuring "Cabana," a young female Spider Monkey, her parents and rainforest animals. The book is approximately 30 pages long and features full spread color illustrations.


My Review: It's This Monkey's Business is the story of Cabana, a spider monkey who lives in the Rainforest. Cabana is dealing with her parents increasing fights and the violence of them. When their family takes steps to regain the peace within their family, Cabana learns to thrive in a single parent family environment while still remaining close to her Papa.

It's This Monkey's Business is a well written, colorfully illustrated book that tackles domestic abuse from a child's (or monkey's, in this case) point of view. This book is for every child who has had to witness abuse within their family - be it verbal or physical - and had to cope as they became a single parent family. Being a single parent myself, and having my son grow up in a single parent environment - albeit not for the same reasons as Cabana's family - I think this is a wonderful book for children who are going through these same issues and aren't sure what to think about going from have two full time parents around, to having just one.

Author Debra Mares sets out to help children going through a difficult time with their parents and does just that. While not many children's books tackle these serious issues, Mares faces them head on and writes in a children's (or monkey's) perspective in order to help these children. 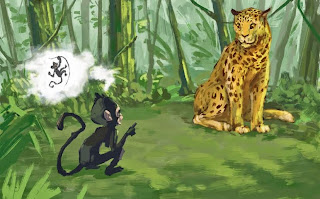 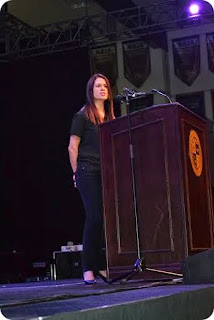 For Independent Author Debra Mares, violence against women is not only a topic in today's news, it's a topic in her crime novels, cases she handled as a county prosecutor, and now it will be the topic in her first children's book It's This Monkey's Business.  Debra is a veteran county prosecutor in currently specializing in community prosecution, juvenile delinquency and truancy.  Her office has one of the highest conviction rates in and is the fifteenth largest in the country. You name it - she's prosecuted it - homicides, gang murders, domestic violence, sex cases, political corruption, major fraud and parole hearings for convicted murderers. She is a two-time recipient of the of the Year Award and 2012 recipient of the Community Hero Award.

Debra is the granddaughter of a Mexican migrant farm worker and factory seamstress, was born and raised in Los Angeles, was the first to graduate college in my family, and grew up dancing Ballet Folklorico and Salsa. Her own family story includes struggles with immigration, domestic violence, mental health, substance abuse and teen pregnancy, which she addresses in her novels. She followed a calling at 11 years old to be an attorney and voice for women, and appreciates international travel and culture. Her life's mission is to break the cycle of victimization and domestic violence.

Taylor Christensen is a Los Angeles-based illustrator holding a BFA from of Art & Design, focuses on fantastical creatures and surreal imagery, and produces artwork for illustration, character and concept design.
Her latest book is the children’s picture book, It’s This Monkey’s Business.
For More Information

Everyone who knows me knows that I am a HUGE fan of Len! She's a very talented and incredible writer and has to be one of the sweetest people I've had the pleasure of meeting. (She also has a love of Jensen Ackles, so that's a plus too.) With that being said I am honored to help Len in celebrating the new cover of her Thirty-Eight Days. The cover goes live December 1st, but until then check out this beauty below from Najla Qamber Designs. 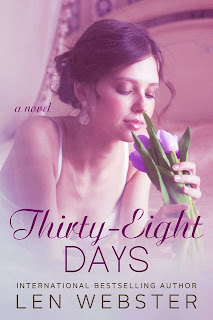 Nolan Parker and Clara Lawrence never saw eye to eye. In fact, if you asked Clara she would tell you that Nolan Parker hated every thing about her. They never shared any form of connection besides Alex Lawrence.

Five years have passed and almost 12,000 miles have kept them separated, both living completely different lives. Unchanged perceptions and expectations should have kept them apart. But when Nolan returns, the foundations of their relationship is sure to change.

Their story was meant to end the day Nolan left for Stanford. But what if seeing each other after five years was the game changer? What if this was their one chance to rewrite their relationship or were they always destined to never be more?

“I love Nolan Parker for every imperfection
he has and for every bit of perfection is.”
-Clara

“I will never love another woman like I love her.
In my arms, I hold my forever.”
-Nolan

EXCERPT: “It was mid-semester break, and I was almost done perfecting a cupcake when I remembered about the party our uni held. Darren had begged and pleaded for us to go, but I told him I wanted to work. But then I changed my mind. When I got there, I couldn’t find him, so I went out looking for him. Stevie tried to stop me, but I kept refusing until she gave in and followed me.

“I found Darren after we walked out to the field. He had Elizabeth against a tree, having sex with her. He told her he loved her, and it broke my heart. He never told me he loved me, and it was painful. I went to leave and tripped on a branch. Darren saw me and begged for me back. I told him it was over and that he humiliated me in front of everyone. I was glad that I had Stevie there. She made sure Elizabeth didn’t say a word.” Clara paused and looked down at the table.
“He never denied that he loved her, because he couldn’t. It was the only truthful thing about him.” Clara didn’t notice the lone tear that slid down her face until Noel reached over and wiped it away with his thumb. The contact alone made her shiver. It felt like more than just electricity. It felt deeper, igniting her body and her senses. When she looked up to him, their eyes met and she smiled. Noel didn’t interrupt her once. He let her talk and it was refreshing.
He’s not the boy I once knew.
“I didn’t know. I’m sorry, Clara,” he said softly with more emotion than she expected.
“Don’t be. Your dick wasn’t in a whore, was it?” She shrugged. Her response alone caused Noel to tense, his hands forming fists and his eyes filling with rage.
“He shouldn’t have done that to you!” he growled. Noel needed calming down. Clara felt a sense of protectiveness string from his voice, and the look in his eyes told her he wasn’t kidding. She rose from her seat and crouched in front of Noel, placing a hand on his cheek.
“Noel, it’s okay. It doesn’t hurt me anymore,” she said, trying to bring him back. His green eyes were glassy and his body was strung up tight. She caressed his face until he shook his head lightly and placed his hand on top of hers, causing her to flinch. His touch was tender yet she felt the callousness of his hand on hers.
Walls, Clara, remember your walls!
But the thought didn’t disarm her. She simply kept her hand on Noel’s cheek and met his eyes. There was no denying the fact that she felt safe with him.
“Clara, I wouldn’t hurt you like that,” he said. She tensed, her eyes going wide.
Fear and panic filled her body. She didn’t expect Noel’s response. They were inches from each other, and he was looking at her in a way she’d never seen before. 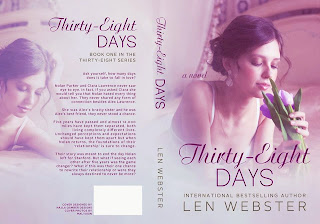 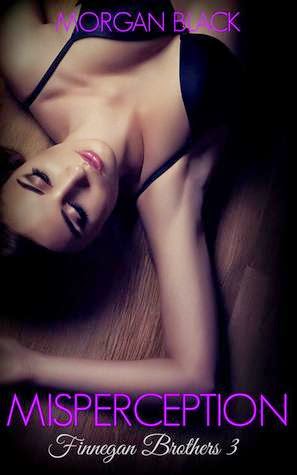 
The Finnegan brothers are constantly pulling Lena back in. Micah deserves her attention but when Blake calls she will always run to save the day, even against her better judgment.

With the wedding looming and love in the air Lena has to make a decision. Finally be rid of the Finnegan brothers for good and be with the mysteriously attractive Micah, or be thrown back into the madness?

In the end who will she choose?

I sprinted through the night until I came upon a couple from the party.
“What happened?” I gasped through rushed breaths. “Why is everyone standing around?”
The girl looked at me, annoyed. “Because there’s a guy on the roof?”
“What?” I looked past them and saw Zoe and Blake. I ran to them.
“What the hell is going on? And why is some asshat on your roof?”
Blake looked at me. “Where have you been?”
I tried to smooth down my hair. “Doesn’t matter. What is going on?”
Zoe began, “Well, see…”

"The whole time I was fucking her I wanted it to be you. I even said your name." He shook his head back and forth, clearly disgusted with himself. I didn't react, hoping that it would continue to calm him down, but he kept going. "I said your fucking name, Lena. I could have any girl in the world and yet I want you! Why the hell is that? Why do you still have this hold on me after all this time?"

AUTHOR BIO:
Morgan Black is a hair stylist by day and hottie writer by night. She walks her dogs in high heels and never leaves the house without red lipstick. She firmly believes in the power of Zen, and does Yoga freely in her backyard, in her favorite set of pumps.
Morgan Black also writes hot vampire erom under M. Black. 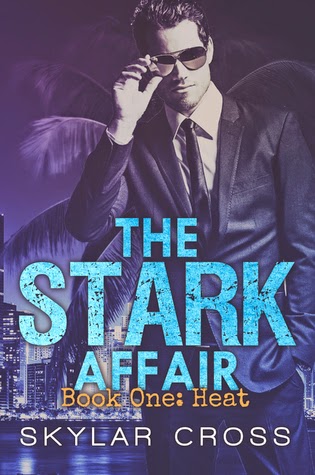 Colton Stark is filthy rich. A billionaire playboy who drives fast and plays hard, he enjoys an endless stream of party girls... at his mansion, on his yacht, and in his private jet.

Tough girl cop Sofia grew up on the mean streets of Miami, unafraid to kick anyone's ass. When asked to investigate Colton, she doesn't even consider it a challenge.

Until she comes face-to-face with Colton Stark's penetrating blue eyes.

After a steamy meeting at his South Beach club, Sofia finds herself playing a dangerous but sexy game with her own principles. As evidence mounts of Colton Stark's dirty dealings, together they spark a bonfire of passionate heat.

I love dark, mysterious, and deviant. Powerful dominant alpha males with troubled pasts who find strong but unfulfilled submissive women. Both need to escape the "rules" of society (just like me... haha.) Together they make hot steamy delight and fill in each other's damaged parts. This is me. This is what I write. Hope you like it.

You can also visit my blog at http://skylarcross.com.