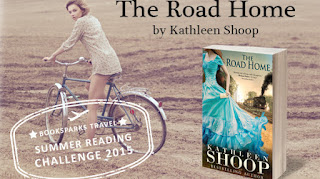 
Week of July 20: The Road Home by Kathleen Shoop

Katherine and Tommy are twins trying to cope with the recent loss of their mother. When people they did not know existed begin showing up on their doorstep to mourn the loss, Katherine and Tommy begin wondering how much they really knew about their beloved mother. In her latest novel, Kathleen Shoop alternates between the past and present to tell an enchanting story of mystery, discovery and the unbreakable bonds between family members.
http://bit.ly/1POg7dX


My Review
This was the first Kathleen Shoop book I've read and from the moment I picked it up, I was utterly immersed in the world of Katherine and Tommy along with the years of 1891 and 1905. Beginning in 1905, the book often flashes back to the year of 1891. The story tells of the years they all spent apart and the relationships between each sibling and their mother. Katherine and Tommy both face their share of hardships in the years apart and both their stories are told.

From the begin to the end, I was drawn into the book and fascinated. There was never a dull moment in my eyes and I easily finished the book in no time at all. Throughout the story you could feel the love of a mother for her children and vice versa and the love that the twins share with one another.

The letters that Katherine's mother leaves behind after passing goes a long way in healing the family she left behind and help Katherine to put the past behind and recognize that her mother did in deed fact love her and Tommy, genuinely love them, despite having to let them go.

Shoop's book is beautifully and timelessly written. She does an excellent job in bringing the story to life, drawing the reader in, and allowing them to feel the characters emotions.

The Road Home is an absolutely wonderful gem of a book.
★★★★

Kathleen Shoop holds a PhD in reading education and has more than 20 years of experience in the classroom. Her third novel, Love and Other Subjects, was a Chick Lit Finalist in the 2013 Beverly Hills Book Awards and received an Honorable Mention from the San Francisco Book Festival. Her second novel, After the Fog, was a category finalist in the 2013 Eric Hoffer Book Awards. Her debut novel, The Last Letter, is a Kindle bestseller and multiple award-winner, including a Gold Medal in the Independent Publisher Book Awards. Kathleen has been featured in USA Today and the Writer’s Guide to 2013. Her work has appeared in The Tribune-Review, fourChicken Soup for the Soul books and Pittsburgh Parent magazine. She lives in Oakmont, Pennsylvania with her husband and two children.