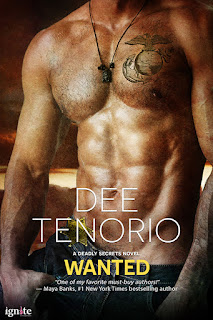 Some secrets are worth dying for…

Undersheriff and former Marine Rick Trelane had one constant his entire life—his friendship with Whitney Peterson. Through thick and thin, she has never faltered. Never blamed. But when her former lover turns up dead, Rick must look past the walls he’s built to the woman he thought he knew inside and out…and discover he was wrong.

Whitney has secrets, deadly ones. The deeper he digs, the more he sees her as a woman he desires. And suspects. But as bodies start turning up, so does the evidence against her. Now the air is thick with secrets and shadows and giving into the longing could turn both their worlds upside down. Because this killer is just getting started…

My Review
If you enjoy a good romantic suspense packed with action, this book is for you. Rick Trelane, the Undersheriff must investigate his friend, Whitney, after her ex-lover turns up dead. Investigating Whitney for murder, he gets glimpes of a woman he thought he knew, but there are secrets that she has been keeping and as Rick keeps digging his attraction not only grows, so do his suspicions.

Rick is faced with a hard decision as to let a killer go free in order to protect Whitney or does he keep digging? With so many twists and turns, the action and suspense keeps readers on their toes.

This is the second book in the Deadly Secrets series and while it can be read as a stand alone, I think it's better to read the first book, Conviction, beforehand in order to give a backstory.

The feelings between Rick and Whitney are very real and the sexual tension is prominent as Rick tries to work through the mystery and secrets surrounding Whitney. Whitney, who has always been in love with Rick, has secrets that she must keep, even if she's keeping them from Rick. I loved how strong both characters were and how genuine their emotions were also.

Tenorio blends the perfect amounts of suspense, romance, mystery and action to create a great story that kept me on the edge of my seat. My only complaint was that it was a little too predictable at times. Regardless of that, it was a still a very good read.