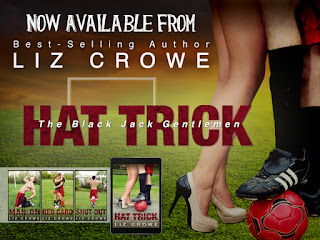 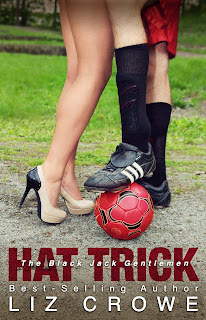 Detroit’s expansion pro team has a hot star forward, fresh from the English Premiere League. Thanks to a series of fatal misunderstandings coupled with his famous temper, Declan MacGuire only has one thing left to him—soccer—and he’s determined not to make the same mistakes in his new life stateside.

Emily Keller, an accidental low-level PR flunkie for the team watches as Declan gets sucked into a whirlwind romance with Cassandra Dean, the team’s Queen Bee groupie, trying not to be jealous while the woman maneuvers him into a sickeningly familiar situation.

When things escalate, the team is forced to take sides, and Declan faces the toughest choice of his life. 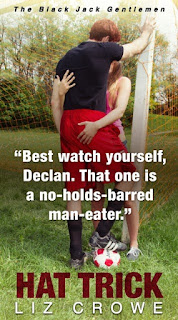 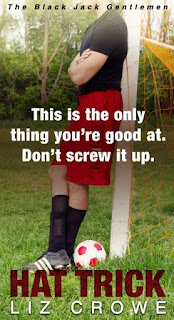 “Hey,” a familiar voice said, making her flinch and almost knock over the glass of ice water the bartender had helpfully provided. She looked up and came face to face with Declan, his deep green eyes sparkly, his thick auburn hair slicked back, that stupid shirt hanging open, per marketing department instruction. Her eyes went directly to his cut torso as if pulled by magnets. She blinked and looked away.
“Hey there.” She held up a finger, figuring it time to resume the alcohol intake. Maybe she could pass out on the way home in the cab and just forget this night ever happened. She shifted when he took the seat next to her and brushed her arm with his.
“It ended all right, didn’t it? I mean, for the charity or whatever it was?” He grinned at her, forcing her to match it and sending a zing of lust from the base of her spine to her toes. That singsong voice—dear Lord, but she could listen to it all night. And she would, if given half the chance.
Stop it, Emily.
“Um, yeah. I mean. It’s for, uh…” She gulped, realizing she’d totally forgotten the cause du jour that had made her have to chaperone this nightmare. “Food Pantry.”
“Right,” he said, accepting a cup of coffee from the bartender. “Cheers, mate.” He sipped, looking straight ahead while she sat, gnawing the inside of her cheek and wishing she could unhear what she’d just heard in the hallway.
“Gabe and Lillian leave?” She sipped the fresh gin and tonic, hand shaking. It was their common conversational thread and she grasped at it.
“Aye,” he said.
The silence took on a heaviness that made it hard to breathe. When she risked a glance at him he was staring at her, his eyes narrowed. “What?” she said, startled and defensive. “Do I have lime in my teeth?”
“No,” he said and resumed sipping his coffee in silence.
She clenched her jaw, willing something resembling a coherent small-talk starter or even a mildly flirtatious comment to emerge. Nothing. She cleared her throat, sipped, cleared it again, sipped some more. Her heartbeat pounded in her ears. The heat from his leg seemed to increase. She moved her thigh ever so slightly away.
“Well,” they said in unison. She giggled and nearly fainted when a flush crept up his neck into his cheeks.
“You first,” they said together.
“Cut it out,” she said. “God, you’re making me feel like a dolt.”
“Me?” He reared back in mock dismay, hand to his bare—very bare—chest.
“Yeah, you. Where’s Jason? Please tell me he didn’t decide to carry his vendetta outside the building?”
“Nah, he’s over there.” Declan pointed behind her. “He’s the one in the lip lock with, ah, what’s her name. I think she’s actually gonna play on the women’s team.”
“Oh, okay,” Emily said, suddenly recalling the recent lip lock she’d been privy to.
“I think Coop is messing with your office girl,” Declan said, motioning for the bartender to refill his cup.
“We call them ‘interns’ in the twenty-first century, at least here in the colonies.”
He laughed and blushed again. She had to sit on her hands not to touch his face, to not brush a lock of thick red hair off his forehead.
“Aye, well, you know what I mean.” He rubbed his jaw and ran his hand around the back of his neck. “Bastard really clocked me.”
“I know. I’m sorry.” She let herself do it—to reach out and just graze his shirt-covered biceps with her fingertips. He flinched as if she’d burned him. “I mean…right. Well.” She sighed and consumed the entire drink in a gulp.
Declan gave a low whistle. “I do love a woman who can do that. It’s the English in me, I guess.”
“English?” She said, wiping her lips with a BJG-logoed napkin. The bit of the booze that wasn’t headed straight to her brain sloshed around in her bloodstream, reminding her of her lack of food in the past few hours.
Oh well. Fuck it.
She turned to him and leaned on one elbow, deciding to flirt because why not?
For some reason, the bar didn’t materialize under her arm and she sensed herself sliding sideways. The teetering barstool made a loud screeching sound right before Emily shut her eyes, waiting for the inevitable embarrassing landing.
But there were strong, warm arms around her waist and lips at her ear, making her eyes fly open.
“Gotcha, PR lady,” Declan said. She swallowed hard and got her feet under her, stepping away from him at the precise second Cassandra appeared, smiling until she saw that Declan still had one hand on Emily’s arm. “You all right?” he said, looking into her very soul.
Oh good Christ, stop it! You are drunk off your ass. This is no stupid romance novel. He is not looking into your soul. He’s staring down the front of your sleazy costume.
“Well, isn’t this cozy,” Cassandra-who’d-just-been-fucked-by-Max said with a sneer.
“Where’s Max?” Emily asked, unable to stop herself, even while knowing better than to engage in any kind of a cat-fight with this bitch.
“Who?”
She had to give the woman credit. Not even a quick blink or blush to acknowledge the blatant cheat. Emily watched as Cassandra ran her fingers through her hair, and then touched Declan’s arm. He let go of Emily and stepped away, blinking fast as if waking up from a trance.
“Time to go, Scotty, my darling.” Cassandra took his hand and turned him away without another word. But as Emily bent down to slip her shoes off, grateful yet sad to let go of the moment, the other woman looked around and pinned her with an accusatory glare.


With a long sigh Emily righted the overturned barstool and sat slumped, mostly makeup-less and wishing herself anywhere in the universe but here.

Declan is a hot shot soccer player who only has one thing going for him: soccer; after leaving his successful UK soccer career behind and losing his fiance. He has anger issues and a quick to anger temper to work through along with a host of personal issues.

Emily is a low-level PR woman who is married with a daughter. She loves her career, but her marriage is failing tremendously. She escapes into her work instead of focusing on her marriage problems.

When Declan and Emily meet they have an instant 'sparks are flying' attraction, but Emily has her failing marriage and her daughter to think of and cannot pursue anything with Declan, despite how much she would like to. While Emily is determined to not go there with Declan due to her personal life, Declan is get sidetracked by Cassandra. With Declan seeing Cassandra, will there be anything worth fighting for between Emily and Declan?

Hat Trick is my FAVORITE book out of this series and I love how Liz tackles serious issues within her book. This time it's a failing marriage but wanting to fight to make it work for your children. Crowe delivers real issues and real romance. It's not all hearts and butterflies within her book, it's real love that you have to fight for.

Crowe has a talent of writing realistic stories. They are NOT instantaneous 'let's go off holding hands and walking into the setting sun while birds chirp around us and we sing love songs'. They are characters who are realistic and have to fight in what they believe in and for who they love and their relationships.

I felt for Emily's struggle as a mom who loves her child and wants to make her marriage work even though she is unhappy. She struggles with her life and her relationships. I loved that even though he heart wasn't in it, she still was loyal. Emily is the type of person who wants to make those she cares for happy even if it's at the cost of her happiness.

Declan...Oh, Declan...In more than one instance I did want to smack this man. He wants a happy ending and I couldn't blame him for wanting to settle down and be happy especially after losing his fiance, but by choosing Cassandra, he choose the wrong person. Ugh I hated Cassandra so very much.

Hat Trick is honest, real, and raw. It covers a sensitive subject and after reading Crowe's previous books, she is the perfect one to deliver this book and you can see that within her writing.