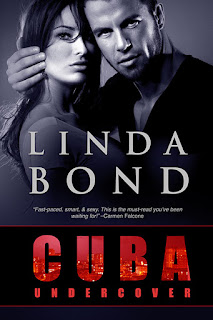 
His revenge will change her life forever…
Cuban-American TV reporter Rebecca Menendez’s success comes from playing by the rules. When she’s kidnapped by a fierce and intensely handsome man who needs her help, however, all of those rules seem pointless. Nothing could have prepared her for being taken hostage…or the irresistible reward if she complies: information about her long-thought dead father.
Antonio Vega has spent almost every day of his adult life dreaming of revenging his father’s death. With his sister’s life and freedom in jeopardy, Antonio isn’t taking any chances. But once Rebecca and Antonio are in Cuba, they’re immersed in a world of corruption, deceit, and betrayal. It’s a deadly game…and there are no rules.

MY REVIEW
Cuba Undercover is an action packed romantic suspense filled with intrigue, suspense (of course!), and a ton of sexual tension.

Thrilling and adventurous, Author Linda Bond paints a portrait of Cuba with her beautiful and realistic descriptions and you can imagine yourself right there along side the characters. This is the first time I have read a book set in Cuba and Bond did a great job at describing Cuba to the point where I felt as if I had just been transported to another country.

I enjoyed the fast-paced thrill ride Bond takes readers on and felt as if I was on a roller coaster at Cedar Park.

Both Rebecca and Antonio are wonderfully, well-written characters and the attraction and chemistry between them sizzles. While not many love scenes, the ones that this book does feature are HOT and really emphasize the romance between them. I thought the sexy times were well written but I glad there wasn't an over abundance of them or it would have taken away from the adventure of it all.

This is my first book by Bond and while I didn't realize it was the second in a series, this can easily be read as a standalone.

Bond is a talented author and I look forward to discovering more of her work.