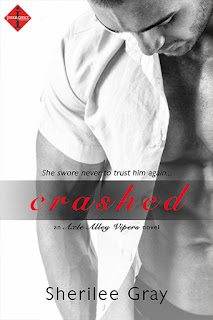 
She swore never to trust him again...
Fiery mechanic Alexandra Franco should have known better. Years ago, her best friends' older brother took her virginity and broke her heart - or rather, doused it with gasoline, lit a match, and then walked away. And Alex definitely should not have indulged in another hot night with him after the fact. He's not the same boy she fell for, and she sure as hell doesn't want anything to do with the wealthy, ruthless man he's become.
Walking away from Alex was the biggest mistake of Deacon West's life. She belongs with him, and if getting her back means playing dirty, so be it. If she'll grant him a three-month, no-strings affair, he won't sell the building Alex and his sisters use for their auto repair business. Hell, he'll even sign it over to them. But will Alex ever entrust her heart to him again, or are they destined to crash and burn?

Mechanic Alexandra Frano's business and garage means everything to her and her co-workers/best friends, Piper and Rusty and when it begins failing there's only one person who can decide the garage's fate.

The man on the deed.

Who is he? Piper and Rusty's brother, Deacon: the man who stole Alexandra's virginity and left her brokenhearted when he married someone else. Resentful of Deacon, but wanting to keep her garage, she gives into Deacon's proposition. For the next three months, Alex is to be Deacon's date to business functions PLUS his friends with benefits. If she can give three months of herself to Deacon, he will sign the garage over to her.

I really enjoyed Alex and Deacon's relationship and the fact they knew each other since they were children. I really did think Deacon felt remorseful and genuinely wanted to make things right and have a second chance with Alex, regardless of the way he went about getting it. I enjoyed Alex's friendships with Piper and Rusty.

Crashed is addictive from the start and I didn't want to put it down for a moment. I loved they sizzling chemistry between Alex and Deacon and the tension that was present during each interaction. The characters are different and fun and so is the plot. Alex is not your typical girl. She's not pink and frilly, but instead filled with biting sarcasm and wit and has a collection of tattoos and piercings that would rival that of an emo kid.

I really enjoyed this read and it has become one of my favorites of summer so far. I laughed, I blushed, I smiled, and I felt like I needed to avert my eyes from the sexiness radiating from my Kindle a time or two. All in all, Crashed is a great and fresh new read and one that I definitely recommend.