ARC Review: Masquerading with the CEO by Dawn Chartier 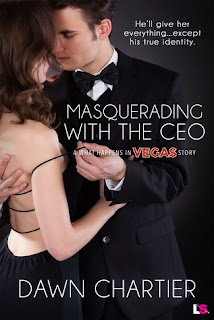 He’ll give her everything…except his true identity.

After catching her fiancé cheating on their wedding day, interior designer Kylie Edwards swore off high-powered men. But before she can drown herself in wedding cake, she’s dragged to a Vegas romance conference by her friends. At least she’ll be able to meet the hotel’s owner and pitch her new design idea. And maybe attend the elaborate masquerade ball, where business unexpectedly becomes pleasure with the hotel’s oh-so-hot head of security.

Jake Royale’s no security guy-he owns the hotel and casino. The masquerade ball gives him the perfect opportunity to drop his high-profile identity and blend in. To be seen as a man, not his money. But when one hot night with Kylie becomes more, Jake knows he’s screwed. Not only will his fake identity cost him the design that will catapult his casino back to the top, it might just cost him the one thing money can’t buy…

My Review
Who is the man behind the mask? After Kylie catches her fiance cheating, on their wedding day no less, Kylie gets herself dragged to Vegas and masquerade ball. Meeting a man was not on her agenda, but the attraction is there and her masked man can give her exactly what she wants - and needs.

Jake Royale is the owner of the casino hosting the masquerade ball. Dropping his recognized and highly sought after profile, Jake hides behind his mask for the night. Spending a night with Kylie is hot and passionate, but it also backs him into a corner. While Kylie's design could bring his casino back up to the top where it belongs, he would have to admit to his true identity.

Masquerading with the CEO is sexy, steamy, Vegas fun. Jake is the full package - smart, sexy, and successful and Kylie herself is strong, talented, and sweet. The two of them definitely have a connection, but with Jake hiding his identity and Kylie determined to pitch her idea to the casino owner (aka Jake), trouble is bound to happen and while Jake and Kylie may not have been looking for more than one night, the truth might break both their hearts.

The only flaws were that I found myself yelling "Just tell the truth! Tell her who you are!" quite a bit. Continuing the charade just seemed to make things worse. Also, I really kind of wanted to see Kylie's ex and her maid of honor have some horrible happen to them that made them kind of wake up and realize how awful they are, but I often wish that in books that feature this kind of scenario.

Masquerading with the CEO is a fast paced and enjoyable book. I found myself rooting for this couple from the get go. I really liked their chemistry and the characters themselves.