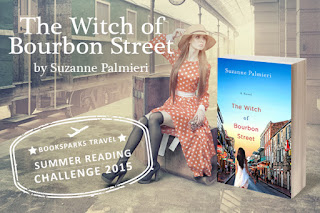 DESTINATION: GET JAZZY IN NEW ORLEANS

Week of July 27: The Witch of Bourbon Street by Suzanne Palmieri

Situated deep in the bayou is the formerly opulent Sorrow Estate. Once home to a magical family, the Sorrows, it now lays in ruins, uninhabited since a series of murders in 1902 shocked the entire community. When Frances Green Sorrow is born, the family is on the brink of obscurity and the last remaining Sorrows cling to the hope that she is the one who will finally resurrect the glory of what once was. The Witch of Bourbon Street is a story of love, family, redemption and forgiveness. It’s a story that bridges the nostalgia of time, and brings those that are separated back together again.
http://amzn.to/1FUXL5x
My Review
The Witch of Bourbon Street is one of the books I was anxiously awaiting for the SRC 2015. Having previously read The Witch of Little Italy not too long ago, I was eager to dive into this one.
The Witch of Bourbon Street begins in 1901 and all but one of the Sorrow family members is dead. Members of the two suspect that it is either Sister Vesta Grace who has killed the family off or Rosella, a voodoo witch. The beginning of the story though is Sister Grace's confession.
Flash forward to 2014. Frances Green Sorrow was considered a woman that could restore her family's name, but instead of restoring the Sorrow name she runs away and escapes into a marriage with Danny, a man she divorces shortly after the birth of their son, Jack. Returning the the Sorrow family estate, Frances hides herself away from the town, her ex-husband, and son.
Frances has secrets to keep, the biggest one of which is Sippy, but when Jack disappears (which he has planned to bring his parents back together) Frances must come out of hiding and embrace not only her gifts but reconcile with her past - that of herself and her ancestors.
What I loved about this book:
-The setting. The Bayou setting was an absolute perfect background for this mysterious and witchy book.
-The past and present. I loved reading about the Sorrow family of 1901 and what was happening during that time and then flashing to 2014 and the various POVs (Frances, Danny, Millie, Sippy, and Jack).
-The mystery behind the murders. The murders that take place in the Sorrow family are riveting. I loved the mystery of it and how haunting the author paints the past.
-The magic. The magic in this book was some of my favorite parts. From Crow, who helps guide the family, to fortune telling and Bayou ghosts, The Witch of Bourbon Street is nothing short of magical.
I really enjoyed Palmieri's latest book, but at times I found it a bit lackluster. The beginning was a bit slow, but the middle and end were riveting, suspenseful, and mysterious and made me glad that I kept reading. All in all, The Witch of Bourbon Street is hauntingly enjoyable.

Suzanne Palmieri is the author of The Witch of Little Italy and the forthcoming The Witch of Belladonna Bay (May, 2014). She is also the co-author of I’ll Be Seeing You under the name Suzanne Hayes. She lives by the ocean with her husband and three darling witches. She is currently hard at work on her next novel.