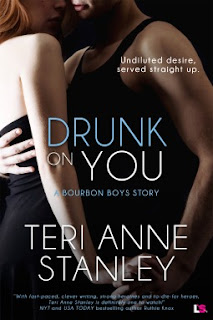 Justin Morgan would happily drown the pain of his injured leg-and the guilt he brought back from Afghanistan-in bourbon. Except, there won’t be any booze if he doesn’t rescue his family’s century-old distillery from financial ruin. The problem? Allie McGrath-youngest daughter of the distillery’s co-owners, and the one woman he can’t have.

Allie has been in love with Justin since…well, she’s always been in love with him. Now he’s home, broken up over the death of her brother, and he needs help. She can fix the distillery-she’s sure of it-but no one’s taking her or her sweet new idea seriously. Convincing Justin is her only hope.

Allie is more tempting than Justin expected, threatening a promise he swore he’d never break. If he can’t keep their attraction under control, there’s a solid chance they’ll send the whole enterprise crumbling to the ground…if he doesn’t crash and burn first.

My Review
Drunk On You hooks you from the starts, gives you the feeling of being drunk, but leaves you without the nasty hangover.

From the first page, Stanley captured my attention. Drunk On You is full of wonderfully written characters, a great and engaging plot, and a story line that demands your attention. I was even intrigued by the supporting characters that Stanley has included.

Allie is such a quirky, fun character. In love with Justin for as long as she can remember, now that he is home, she's having a hard time resisting him despite telling herself she has been over him for years. While fighting to prove herself to her family and show them that she can help fix the distillery, the only person who believes in her is Justin.

Justin is struggling with the death of his best friend, who was like a brother to him. Justin and his best friend were in Afghanistan and Justin witnessed his best friend's death. Broken up about it, he heads home. With a sprained ankle, there's no way of escaping his family and his over-bearing dad who wants him to take his place in the bourbon making business just like Justin's twin brother. The other thing keeping him in place? Allie. The same Allie who happens to be his dead best-friend's little sister.

I loved the chemistry between Allie and Justin. Justin is strong, wise, and handsome. You can feel the love he had for his 'brother' and how he respected him and is still respect him, even though he's gone. Drunk On You is about friendship, unrequited crushes, grief, healing, and love. Stanley takes readers on an emotional roller. I loved the connection between Allie and Justin and how heart-warming this book is.  This book is amazing and Stanley is such a talented author. I really enjoyed this book and had a hard time putting it down.