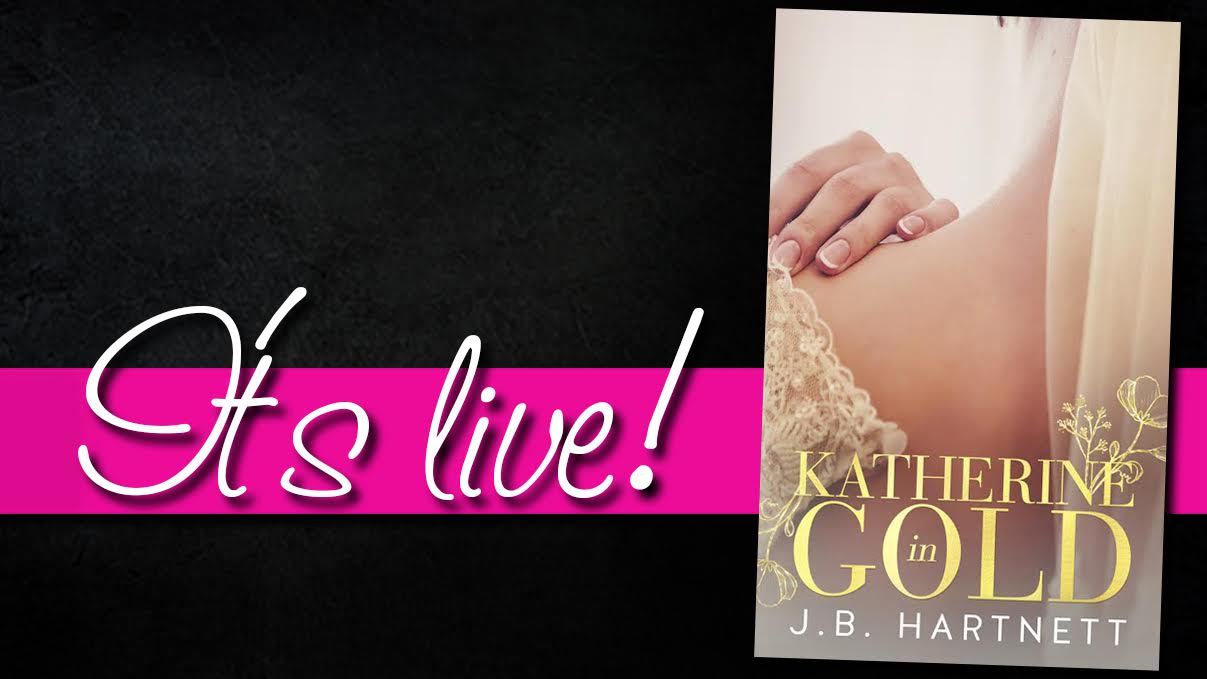 Katherine in Gold is the  second installment of the Beachy Bride series.
In this unique romance, we follow the story of Katherine and Holst.
A tale of shaking off the past, embracing the future, and finding true love. 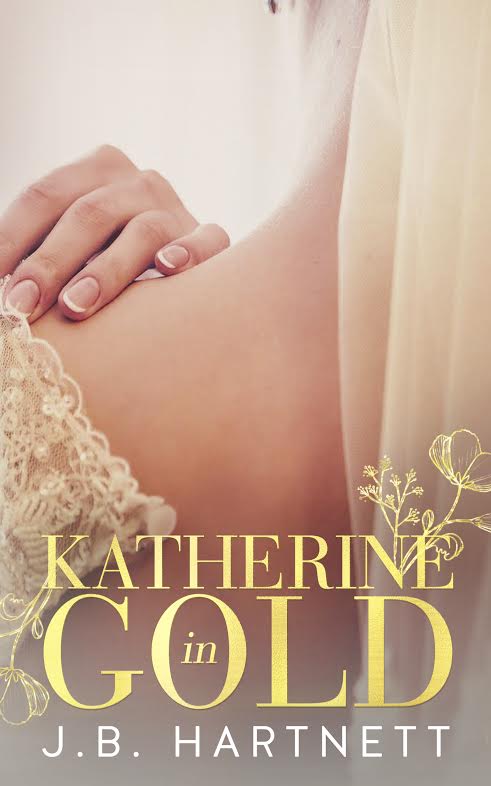 Blurb
*Warning: this is a love story with sexual situations and copious swearing. It also deals with
an inappropriate relationship between an underage girl and a much older man.

When Katherine Symes experiences heartbreak at the age of twenty, she picks herself up,
dusts herself off, and declares no man will ever break her again. The independent, potty-
mouthed Katherine makes no apologies for how she lives her life. Marriage, babies, and
husbands are ideas she’s never even entertained. There is only one thing she’s never had the
guts to do.

Open her own cafe.

The day of her best friend’s engagement, a stranger bulldozes his way into her life.
Handsome, tall, and annoying as hell, he pushes all her buttons. A mutual acquaintance
introduces them, and the stranger, Holst Rutherford, wastes no time in presenting
Katherine with half ownership in a coffee shop he wants to open in Laguna Beach; he just
doesn’t want to do it alone.

Can she put up with Holst to achieve her lifelong dream?

Holst moved to the coastal town of Laguna Beach with clear intentions: a fresh start,
concentrate on his new business, and enjoy the beach at his doorstep. After ending a toxic
relationship, he never considered entering a new one. But there is something about the ever-
combative Katherine which makes him realize she could be much more than a business
partner. She just might be the one.

However, she is going to need a little convincing.

Just another few feet, I faced the green gate with the awesome brass knocker and flagstone steps of Tori’s house. I knocked on the front door of the Arts and Crafts home and waited. I was basically furniture at their place, but they were newlyweds, and I’m no prude, but when you walk in on your bestie splayed upon the front stairs of the foyer, her husband’s head between her legs and his naked ass with a peek-a-boo ball sack greeting you….

Dude. You knock.
The door opened to Cam’s smartass grin, which said everything without saying anything. “Kath,” he greeted.
“Coffee,” I returned, avoiding all conversation with him, and walked straight to the kitchen.
I plunked down at the worn pine table, opened my phone to the message from Goya so Tori could read it, and took a sip from the mug Tori had just handed me.
I’d given several kickass—in my mind—housewarming gifts to the new couple. One was a ceramic garden gnome key holder I’d had custom made. Quite similar to the one that lived on my porch…Gozer the Garden Gnome (I loved Ghostbusters.) Gozer needed a mate, and that mate, of course, was Zuul. Most female garden gnomes were busty, but this she-gnome had enormous boobs, wild, red hair, which lifted at the back to hide a spare house key, and a red dress that left very little to the imagination…I mean, if you were into gnomes, you couldn’t disagree this little gnome had it going on.
My other favorite gift was three coffee mugs: two of which read, “My best friend is a whore.” The third read, “I married a whore” and it was just lucky that Cam had a good sense of humor. Most people think the term “whore” is either an occupation or an insult, but I used it as a term of affection. I wasn’t even sure how it began, but I often said it to Tori, and when I did, it came from a place of love.
Tori took a sip from her coffee and lifted her eyes from the message. “Dude.”
“Dude,” much like the word “whore” or even “fuck,” also had many meanings and uses. It was all in the way you said it. And the way Tori said “dude” meant she was having the same reaction I had to the message.
“I know, right?”
I gave an awkward chuckle and rolled my eyes. I’d avoided Goya all week, blowing him off with the excuse my new business venture was taking up all my time. Yeah, I totally lied. And his message that morning was a reminder, not only about his show, but an offer he made, which filled me with terror, and a term of endearment that made me want to move to another state.
“He said the L-word,” she pointed out. “And he wants you to move in with him?” Just hearing her rundown of the text message gave me anxiety.
I decided not to let that show and deflect the whole thing with humor. “Yeah. I’m just as confused as you are. I even thought he might have sent the message to me by mistake.”
“Kath,” she began softly, “you’re not considering moving in with him…are you?”
I almost choked on my coffee. “Did you snort a big, fat line of stupid before I got here?”
Her eyes bugged out before she said with relief, “Thank God. You’ve been…weird lately. I had to ask.”
Cam suddenly appeared with two huge hiking packs.
“You just got hotter, Cam,” I declared and leaned in to my bestie. “How are you gonna do it?”
“Do what?”
“Hike along those trails and not ass rape him every chance you get?”
She leaned closer, her fingers tapping on the coffee mug, and confessed with total sincerity, “Well, we discussed it, and, after much research, decided that anything I do to his ass will be in the privacy of our own home.” She picked up her mug again and continued casually, “Besides, ticks are a real problem. The ass is the last place you want a tick.”
My Review

Honestly, I don't even know where to start with my review. I could begin with the characters, the setting, the plot, or just by simply saying - I LOVED THIS BOOK. I loved everything about it.

J.B. Harnett has brought her vision for this book alive on the pages. You can picture yourself in this book, friends with these characters. I have never loved a character as much as I do Katherine. She is feisty, sassy, and sweet. The things she says and does are guaranteed to make you laugh and love her. She's such a unique and wonderful woman. Broken, but strong, Katherine is so brave. She keeps a secret down in the depths of her heart and yet her brokenness shines through her eyes, but although everyone around her can see it, only one person can help fix Katherine besides herself and that's Holst.

Holst is a sweet and amazing man who doesn't take Katherine's BS personally. He can see that she is broken and he wants to make her see that he can be trusted and that he is the man for her. Although sweet, there's a bit of a dominant alpha lurking there which makes Holst even more sexy.

Katherine and Holst have a great banter, phenomenal chemistry, and the sex is steamy. You can tell that they are going to be a good couple even before they begin to fall in love with one another. Their relationship is genuine and they both end up helping each other overcome personal demons that each one keeps hidden.

These characters are both real. They are not perfect, they have each been through something, but they are perfect for one another and that is all that matters. The depth and realistic nature of these characters is amazing.

Beautiful, genuine, and real, Katherine in Gold is an spectacular, heartfelt and sometimes humorous book. I laughed, I wanted to cry, and I wanted to hug this author for delivering us readers the perfection that is this book.

"I knew, in that moment, I'd found treasure.
You were my Katherine in gold." 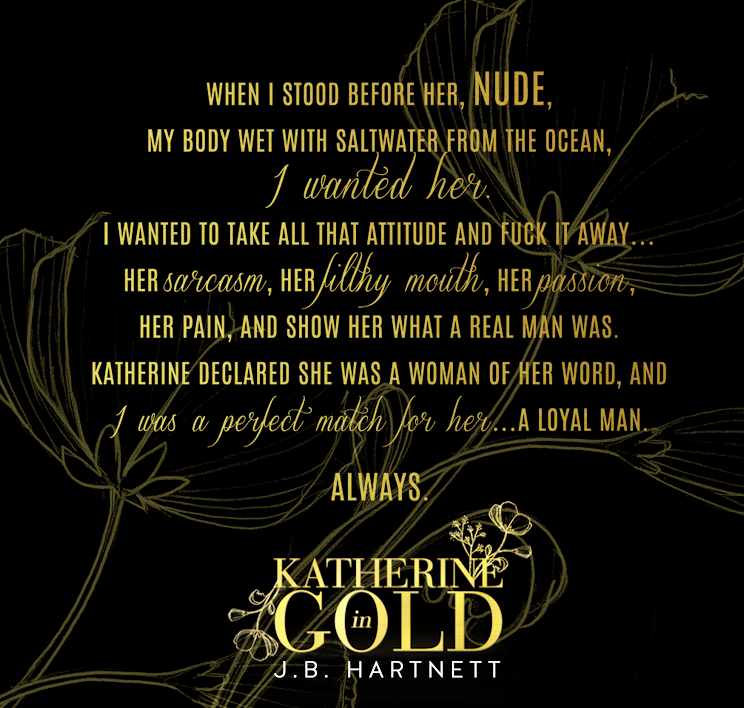 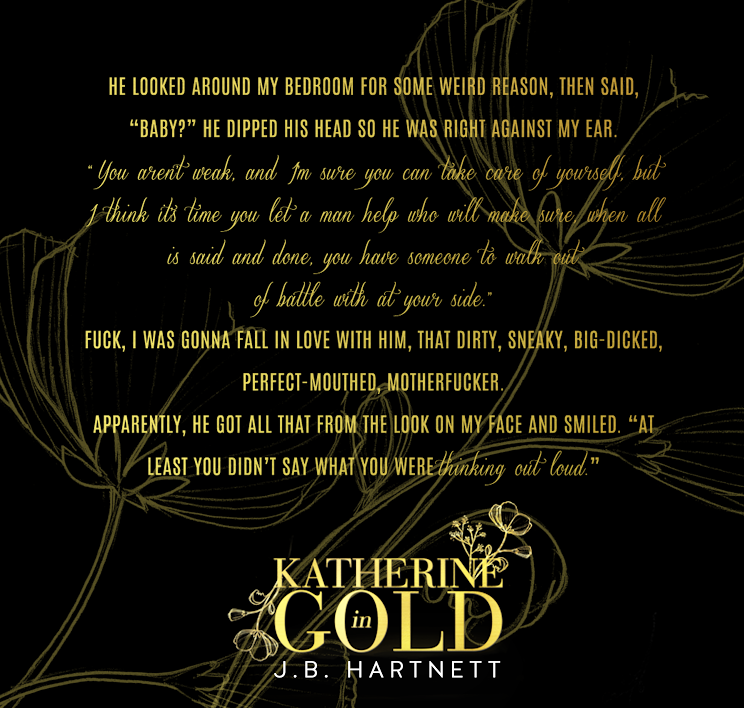 Have you met Cameron & Victoria from Bride in Bloom (Book One) yet?
One-click your copy at the following retailers:

Julie is a Southern California native, a fan of a really good story (preferably romance with a happily ever after), really good pie (preferably pumpkin) and copious amounts of coffee (preferably Folgers).
She has always enjoyed writing and at one time thought she could be a singer songwriter...the 'writer' part is the one that stuck.
Julie is obsessed with pi...the equation(and the food). She's allergic to cats and cantaloupe and hates mushrooms...so if you ever want to give her a gift, those are out for sure.She currently lives with her own romance hero husband and two boys in Melbourne, Australia.