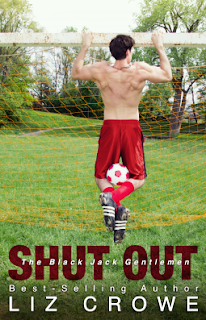 A submissive once, a submissive forever?
A man on the run from the only life he’s ever known, Brody Vaughn is poised to accept the Black Jack Gentleman’s newly vacant goalkeeper’s position. It’s a desperate move, but one he must take to regain his emotional equilibrium. Reeling from his Mistress’s rejection and on the ragged edge of a total breakdown, he arrives in Detroit. Numb with thinly veiled grief, he walks into the club’s front office completely unaware that an encounter with true destiny awaits him.Sophie Harrison has seen it all--as Domme, sub, and victim. Now that her complicated circumstances have landed her as legal counsel for the expansion Black Jacks team, she holds herself aloof in body and spirit. Nothing and no one gets past her fiercely guarded walls. Until the day she looks up to greet the new goalie standing in her doorway, his raw combination of vulnerability and strength making her breathless.Two people, horribly scarred by the excesses of the BDSM lifestyle and hiding from their true selves, meet across a desk over a simple contract. All bets are off.

MY REVIEW
I have to say that I went into this book enjoying the previous two books and having high hopes for this one, but somehow my expectations fell flat. I enjoyed the book but not as much as I did the previous two which is a shame because when I first began reading I thought Shut Out would end up being my favorite of all of the books so far.

I really liked the characters, Brody, a new soccer goalie, and Sophie, the lawyer for the team and thought that the two of them had great chemistry. Brody is younger than Sophie and initially that throws her off, but soon the two of them find their balances. Then their are some major points to happen and BOOM, we are three years in the future. The gap threw me off to begin with but then I slowly began to understand why it happened at the same time I felt like I was being tossed in so many directions, I was finding myself aimless.

There are some good twists and turns, but at the end of the day these books are becoming a repeat of one another with the instant love and unexpected pregnancies. An instant attraction is one thing, but falling immediately in love is unrealistic. And for pete's sakes, let's wrap up the willie, folks!

With all that said though, I did enjoy the book, just not as much as I expected to. I really enjoyed the first two books so I will be giving the next book a chance because I would love to see how Crowe goes from here.