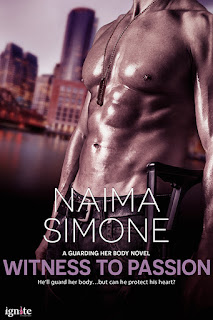 
Under his protection and in his bed…
For Fallon Wayland, birthdays are just another reminder of her looming spinsterhood. This year is shaping up to be no different. Unfairly fired from her job, dumped by her boyfriend, and oh yes, witnessing the murder of a high-ranking lieutenant in the local crime family… Yeah, birthdays suck.

Ever since a disastrous, hot-as-hell kiss years ago, soldier-turned-security specialist Shane Roarke has avoided his baby sister’s reckless—and gorgeous—best friend. Yet when her life is threatened after she witnesses a gang hit, he insists on protecting her…even if she objects.

The two are forced to hole up in a safe house. Alone. Passion long denied erupts between them, burning away their inhibitions. But even as layers—and clothes—are peeled away, danger closes in. Shane and Fallon might finally have a chance at love…if they survive long enough to see it.

My Review
Fallon Wayland has bad experiences with birthdays. From absent parents to break-ups, anything that could go wrong on a birthday, does for Fallon. And this year to put the icing on the cake, Fallon witnesses a murder and now the killer is after her. Her only hope? Shane Roarke - her childhood crush who she had genuine feelings for until he crushed her heart on her 18th birthday.

Shane Roarke has been wildly attracted to Fallon since she kissed him in his mother's kitchen years ago. The problem is, she's not the girl for him with her flights of fancy and her rich parents. He already had to grow up too soon with a mother who suffered from Peter Pan syndrome. The other problem with Fallon? She's his sister Addy's best friend. As much as Shane would want a night with Fallon, things could only get awkward and uncomfortable in the end - even more so than they are now.

When Shane finds out through Addy that Fallon had witnessed a murder, Shane puts everything else aside in order to protect Fallon. But as he protects Fallon, he fails to protect his heart and finds himself falling for her. As Fallon and Shane are drawn closely to one another due to the circumstances, tensions rise high between these two. Will they give in to it and if they do will they be able to walk away?

Witness to Passion is full of suspense, intriguing, and steaminess. The chemistry between Fallon and Shane is off the charts and I could not get enough of this pair. I loved Fallon's sense of humor and admired not only the fact that she walked away from her rich parents in order to make a life for herself and how she could've kept her mouth closed about the murder but instead choose to come forward to get justice for the man who was killed. Shane is the complete opposite of Fallon. He's a military man with rough edges and a hardness to him, partly from growing up too fast and partly from the things he experienced in the war. In the beginning of the book a war is waging inside of him because he is torn between wanting to push Fallon away and wanting to pull her closer. It's interesting seeing how these two sides of him dual and who comes out the victor. I loved the peek into his mind and the dual POV's in this book.

Naima Simone brings the heat when this couple comes together and a few times I was surprised my Kindle didn't start steaming with the sexual tension between these two characters. I really liked Simone's writing style and how she has a slow build between the characters even though it's a long time coming. I also like how she has built up these characters. They are so realistic and a reader can find themselves either relating (in the case of Fallon) or adding a new book boyfriend to their shelves (Hello, Shane!).

I'm really looking forward to seeing where this series goes. Naima Simone is now on my list of authors to look out for. This is one talented author!

*I received a complimentary copy of Witness to Passion in exchange for an HONEST review.*
at June 15, 2015