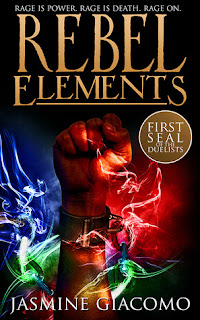 SYNOPSIS: Bayan's struggles to hide his emerging elemental magic from his family fail spectacularly in front of a visiting imperial eunuch named Philo, and he realizes that there is a worse fate than becoming a mountain-dwelling Skycaller: the empire will claim him as a Duelist.
Before Philo can deliver Bayan to the Duelist Academy for training, bandits ambush their retinue and leave behind a mysterious trinket. While Philo tracks down its true importance through ancient archives and noble manors, Bayan struggles to fit in at the Academy, where his anger at his situation gets him into as much trouble as his outlander appearance. Worse, his rage poisons his magic, making him a threat to his hexmates.Bayan's dreams of escape begin to fade as he forms bonds of friendship. But when an assassin strikes close to home, a chain of events is set in motion, leading Bayan and Philo to uncover a deadly plot that could change the world as they know it. Bayan's fate stands at a crossroads: one path leads to the destruction of all he has come to know, and the other to his own.

REVIEW: Rebel Elements is a fantasy novel that reads as a mixture of Harry Potter and The Last Airbender and is the story of Bayan, a young man gifted with magic and destined to become a duelist.

Within Bayan's land becoming a skycaller is one of the most dreaded things to happen to one of the land's people, but becoming a duelist and forced to leave home to serve under the emperor is worse. Bayan has to leave behind his family and his love in order to face an uncertain future that may one day place him onto the battle lines.

As hard as Bayan fights his gift, he learns to become one with them as time passes. Although still longing for freedom and for home, Bayan begins to build deep and lasting friendships and begins to succeed at duelist school.

At the beginning I felt as if Rebel Elements was a bit slow, but I am beyond glad that I did not give up on this book. The pace did pick up and I ended up becoming involved in the story line and overcome with the need to know what would happen next.

I admit at times I was confused with what the character was saying, but I loved how the author included a map and glossary within the book to help the reader better understands what characters are talking about.

Rebel Elements is a great read that builds on friendships, growing up, and new beginnings. With a well formed plot and well defined characters, Rebel Elements leaves you wanting to move onto the next book immediately.