Cover Reveal: In the Beginning by London Miller 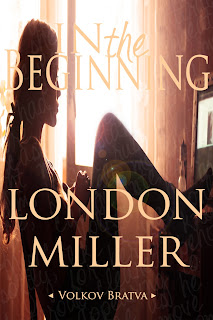 SYNOPSIS: Twenty-year-old Lauren Thompson escaped her small hometown in Michigan for the Big Apple, where no one knew her name. Starting over is easier than she imagined with cool friends and the mysterious boy from the coffee shop.

But Mishca Volkov has secrets, secrets that makes him deadly for someone like Lauren. When explosive truths threaten to tear them apart, can they fight through it...or were they cursed by fate before they ever met.

EXCERPT: Lauren snapped out of her thoughts, blinking rapidly as she realized she had just been standing there, staring at him. Clearing her throat, she tried for a smile, extending her hand. “I’m Lauren.”
A corner of his mouth tipped up as he pocketed his phone. He took her hand in his much larger one, his hold gentle as he swept his thumb across the back of her knuckles.
For a moment, it felt like they were the only ones in the cafe as she stared up at him, captivated by the sheer curiosity she saw in his eyes. Was this what it was like? That instant attraction? She had never felt breathless before, had never felt more than a casual interest in a boy, but right now, standing in front of him, blood rushing to her face, this was definitely more than a casual interest.
“Mishca Volkov,” he answered softly, like it was only meant for her to know. 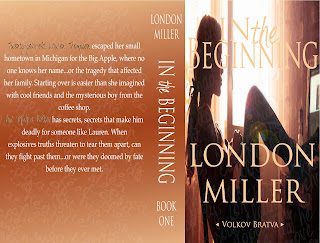 AUTHOR BIO:
London Miller lives in Atlanta, Georgia with a degree in Creative Writing and has an unhealthy interest in the mafia lifestyle. Her debut novel, In the Beginning, is due to be released November 4, 2013 followed by the sequel, Until the End in early 2014.

GIVEAWAY:
London has a fabulous and massive giveaway for all you readers to enter via facebook (just look for the giveaway tab). The giveaway can be found here: London Miller Facebook Page and consists of some great prizes. Good luck to all that enter ;)
at September 20, 2013