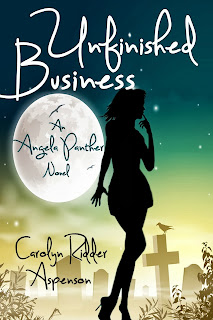 
SYNOPSIS: ANGELA PANTHER HAS A PERFECT LIFE:  A lovely home, an attentive, successful husband, two reasonably behaved children, a devoted dog and a lot of coffee and cupcakes. But while her life might border on mundane, she’s got it under control. Until her mother, Fran dies-and returns as a ghost. It seems Fran’s got some unfinished business and she’s determined to get it done.

Now Fran’s got some nifty celestial superpowers and isn’t opposed to using them to levy a little ghostly retribution on her granddaughter’s frienemies and even her own daughter, which doesn’t make Angela happy.
While Angela’s shocked and grateful to have her mother back, she’s not thrilled about the portal to the afterlife Fran opened upon her return. Now every ghost in town is knockin’ on Angela’s psychic door, looking for help-and it’s a royal pain in the butt.
Now Angela’s got to find a way to balance her family life with her new gift and keep her mother in line. And it’s a lot for one woman to handle.

REVIEW: As soon as I read the blurb for this book, I knew it had to be my next read. Carolyn combines the perfect amount of grief, hilarity, romance, and paranormal to make this quite an interesting read.

Angela, a seemingly normal housewife who can banter with the best of them, wakes up one morning to find out she can see dead people. More specifically she can see her recently deceased mother. So what's a girl to do? Grab a cupcake and her best friend and set out to find a way to stop seeing her dead mother's ghost. Only Angela gets more than she bargained for when she realizes that not only can see her mother Fran, she can see the ghosts of others and the ghosts are starting to realize that she's a regular ol' ghost whisperer.

Meanwhile her teenage daughter is struggling with personal problems, her son seems to be seeing the ghost of his grandma as well, and her dad is having health problems himself. With one thing happening after another seeing ghosts is the least of Angela's worries.

Although Unfinished Business is a lot about Angela and her ability to now see ghosts, it does touch on some very serious topics such as drugs and peer pressure.

All of Carolyn's characters are easy to relate to and the emotions are very real. The friendship between Angela and her bff, Mel is the kind any woman would want and the banter makes you laugh out loud. The mother-daughter relationship between Angela and her mother, Fran, is one of a kind and the interactions between them are hilarious. Only a ghost mother would be telling you that you need a fresh coat of paint!

This was a laugh out loud, remarkable read. I'm looking forward to the next Angela Panther book, Unbreakable Bonds.

*This book was given to me by the author in exchange for an honest review.