After an erotic one-week fling with a musician she meets in a bar, Thea Cunning never expects to see Levi Black again. Then Monday morning comes around, and she discovers that her former lover is not only her professor, but he’s also one of the top criminal lawyers in the state of Massachusetts. With everyone in class vying to be one of the twelve disciples—a group of twelve students that Professor Black takes under his wing—tensions run high. Thea considers dropping his class, given their passionate week together and their undeniable chemistry. After all, there are other (less infuriatingly sexy) law professors on campus. But to accomplish her goal and get her father out of prison, Thea knows she needs to learn under the best of the best—and that’s Levi Black. But can she learn under the best, without being under the best? 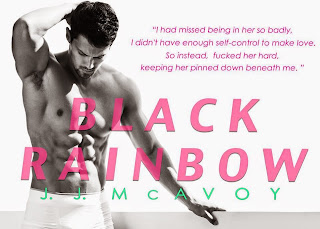 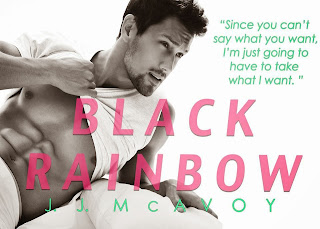 “The distance, no matter how small, between us was enough to drive me mad. He brushed my hair aside and kissed my neck, each step towards my bedroom felt to long… too damn far away. And I couldn’t help but want to stay in his arms longer. I loved how he touched all of me with no reservations.
“This is a clothes free zone,” I whispered, as we finally entered my room. To illustrate my point, I rid myself of my bra as I stepped though the threshold. “House rule.”


“Who am I to go against the house rules?” he muttered, unbuttoning his shirt. I lay back on my bed watching him. “Aren’t you going to help?” he asked. 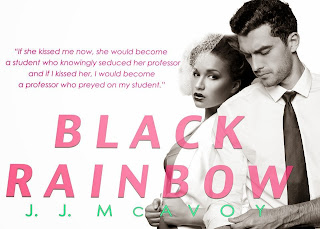 Let me first start by saying: I LOVE THIS BOOK. I really, really love this book.
Levi Black, a successful and respected lawyer and law professor, finds himself in quite the situation when he realizes the woman he spent an entire week in bed with is now his student. Not wanting the mess or the distraction, Levi tries to build boundaries between him and Thea, but finds himself unable to resist her.
Thea Cunning never imagined that the man she had spent the last week having mind blowing sex with would turn out to be her professor. Instead of walking away and dropping the class like she should, Thea is determined to stick it out.
Will they succumb to the passion and chemistry between them?
I love being introduced to new authors especially if they are incredibly talented and show the promise J.J. McAvoy does.
Black Rainbow features an interracial relationship between a professor and his student. As a believer in love is love no matter the color, religion, or gender, I really liked the fact that J.J. featured an interracial couple as her leads. I'm also a big fan of professor/student books. The naughty forbidden twist is pretty hot. What I really loved about Black Rainbow is the fact that Levi and Thea met and spent this incredible week together BEFORE becoming student and teacher. Speaking of which, I love the past/present writing style and the dual POVs.
As for the characters themselves, Thea has her own reasons for wanting to study under Levi Black and become an attorney. Her determination makes her such a strong character. She doesn't back down or turn tail. She stays in Levi's class no matter how awkward things could become. I admired that in her. Her strength, her vulnerability, her determined nature, bring her character into being. I love her focus, cunning, and wit.
And Levi... Ah, Levi... Can I have my very own one of him? Levi is referred to by students El Diablo or in the law world, The Cleaner. He is successful, cunning, and imposing. When he sets out to do something, he does it. His character is so complex and there are two sides to him. When it comes to the professional world as a professor he can be a jerk and come off as cold. As an attorney, he is calculating and ruthless. But as himself and a lover Levi is demanding, kinky, and beyond sexy. As straight laced as he is in his professional world, behind closed doors he brings the kink & the heat! Levi's character is probably the most complexed characters I've been introduced to but also the best, most well defined character. I am in love with Levi Black. J.J. McAvoy did an incredible job bringing this character to life among the pages of Black Rainbow.
Black Rainbow is about the journey of self-discovery within two people who seem so different from one another yet share a connection. The book features themes of redemption and personal growth.
Black Rainbow is intriguing, mesmerizing and well developed. With a plot that leaves readers wanting more, Black Rainbow is honestly the best book I've read in 2015.
I wish I could rate this book MORE than just FIVE STARS. I look forward to reading more from J.J. McAvoy. 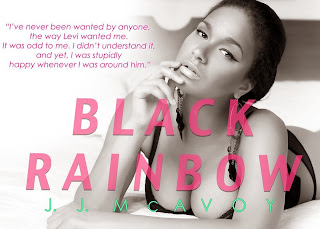 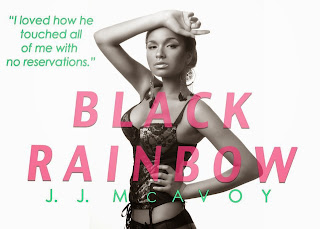 J. J. McAvoy first started working on Ruthless People during a Morality and Ethics lecture her freshman year of college. X number of years later, she is an insomniac who has changed her major three times, and is a master in the art of procrastination. If you ask her why she began writing, she will simply tell you “They wanted to get their story out.”

She is currently working on her next novel . . . so please bug her on Twitter @JJMcAvoy