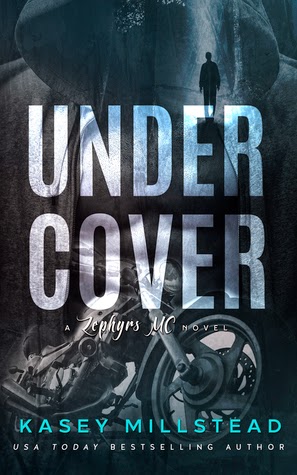 Synopsis: In out, in out. I watch my cock sliding in and out of the club whore's pussy. My gut tightens, not with desire in the lead up to my climax, but in disgust. I squeeze my eyes shut, praying the image isn't burned into my retinas. I hate my fucking job...


When FBI Special Agent, Roman 'Oak' Drake, infiltrated the Zephyrs MC, he expected to find a lot of things - all of them illegal. What he didn't expect to find was the beautiful brunette serving drinks behind the bar at Club Z.

Willa Burke spends her nights serving drinks at Club Z. It's not the life she imagined for herself, but sometimes you don't get a choice; you just have to do what you can to get by.

Outside of working for them, she'd never shown an interest in the Zephyrs.

Until she met Oak. The tall, wide, muscled man with skin the color of burned caramel and eyes a shade lighter than melted chocolate.

He's good and clean pretending to be bad and dirty for the sake of his career.

When Oak brings the Zephyrs to their knees, will it also mean the end for Willa and him? Or, will it strengthen their bond?

Undercover is a stand alone novel with a happy-ever-after.

My Review
"As the wind rushes past my face,
I can't help the flutter of excitement that swirls in the
bottom of my stomach.
Destination: Ford, Oklahoma.
Home of the Zephyrs MC."

When Willa Burke's parents are killed, her older brother rescues her from a life of loneliness, taking her back to Ford, Oklahoma with him. She works to get by tending bar at Club Z, where she meets Oak.

"My name is Roman Drake
and I am a Special Agent with the FBI.
Six months ago, I was required to infiltrate the
Zephyrs Motorcycle Club
in Ford, Oklahoma."

Roman "Oak" Drake is a man on the mission. A Secret Agent in the FBI, Roman has been tasked with bringing down the Zephyrs. He never saw Willa stumbling her way in to his mission and never planned on falling for her.

While Willa tries to get the man who killed her parents off her back, Drake keeps his true identity a secret from Willa. Will Willa and Drake be able to make their relationship work when the truth comes spilling out amongst the wreckage?

Zephyrs MC popped my cherry! Before Zephyrs MC, I had NEVER read a book written by Kasey Millstead (Gasp!) nor had I ever read a MC book (Another shocker!). After reading Zephyrs MC though not only will I be reading more MC books in the future, I am also addicted to Millstead's writing. Seriously, how I have I gone this long without reading anything by this author? Shame on me!

Millstead has so much going on in one book that readers are constantly holding on to their seats waiting for the next drop on the Zephyr roller coaster. With the truth centering Willa'a parents death, the secret Drake keeps, the goons hounding Willa, and Drake and Willa's relationship PLUS how Drake's case will eventually end - and the guessing as to if anyone will be left standing - this book leads you up to the top of the roller coaster, only to drop you down quickly with each twist and turn.

I loved the characters. As I mentioned MC books are new to me so I wasn't sure how much I would like this book and the characters, but ultimately I loved the whole package. Drake was so badass with his sexy drawl, his muscular body, and his badge. He screamed danger, but in a good way. He has the over-protective alpha routine down pat, but on him it's just sizzling hot. Willa is a character I could relate to as a female. She's strong, a hard worker, and has learned to be independent. She shows great qualities in a female lead and I found myself really liking her and her relationship with Drake.

I loved the suspense of this story, the angst, the romance. Zephyrs MC sure does deliver! If you are like me and have never read a MC book, this is a great one to start with.