ARC Review: The Girl and The Clockwork Cat by Nikki McCormack 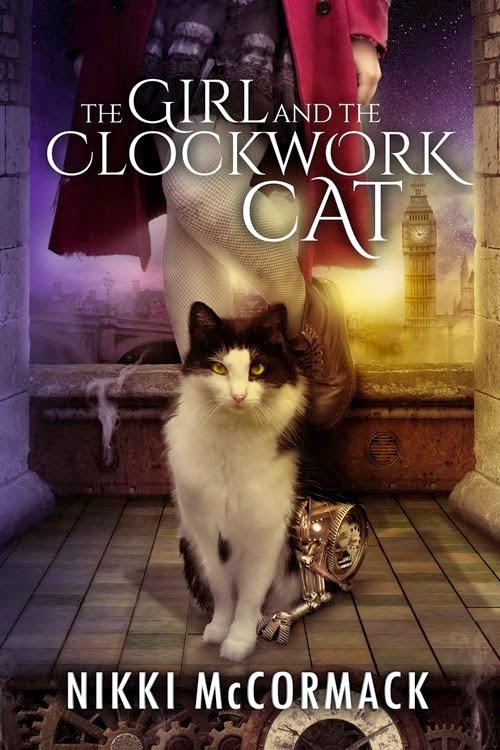 Feisty teenage thief Maeko and her maybe-more-than-friend Chaff have scraped out an existence in Victorian London’s gritty streets, but after a near-disastrous heist leads her to a mysterious clockwork cat and two dead bodies, she’s thrust into a murder mystery that may cost her everything she holds dear.
Her only allies are Chaff, the cat, and Ash, the son of the only murder suspect, who offers her enough money to finally get off the streets if she’ll help him find the real killer.
What starts as a simple search ultimately reveals a conspiracy stretching across the entire city. And as Maeko and Chaff discover feelings for each other neither was prepared to admit, she’s forced to choose whether she’ll stay with him or finally escape the life of a street rat. But with danger closing in around them, the only way any of them will get out of this alive is if all of them work together.

My Review: Maeko has been on her own since a young age. A street rat is what they call the children and others like her who live on the streets with no home to call their own and no place to go.

When Maeko finds a cat in an alleyway, she sees a friend, but the adventure the 'clockwork' cat leads her on leaves the cat her ally. In a race to clear the name of the kind gentlemen who treated her like a young lady and not a street rat, Maeko finds herself in dangerous waters.

Will Maeko be in time to save all the people counting on her or will it be too much of a burden for a teenage girl to bear?

The Girl and The Clockwork Cat is the first ever steampunk novel I have read, but it won't be the last. Nikki McCormack draws you into a world you can only imagine and leads you on a great adventure full of mystery and dare devil heroics.

Maeko, the heroine of the novel is not like other heroines. She is a young Japanese girl living on the streets after running away from home years earlier. Only a teenager, she has overcome incredible odds to stay alive and to be safe and healthy. Chaff her friends has helped keep her safe but she lacks true companionship which is where the clockwork cat comes in. They both need and depend on one another and their bond becomes cemented over time. I loved the fact that Maeko welcomed this cat into her life and that they both kept rescuing one another.

The other thing I loved was how Maeko's relationships are all left unsaid. Will Maeko form a relationship with the mother who she believed turned her back on her? Will she choose Ash or Chaff. Only Maeko has the answers, but The Girl and The Clockwork Cat leaves it to us, the readers, to draw our own conclusions. So I ask of you, my fellow readers, after you read The Girl and The Clockwork Cat to let me know whose team are you on. Are you a supporter of Maeko and Chaff or Maeko and Ash?

Nikki McCormack's The Girl and The Clockwork Cat is the perfect read for all those who love the steampunk genre. I suggest you all pick up your copy today. Even readers like me who have never read steampunk before this book are sure to enjoy it.

And with that I give The Girl and The Clockwork Cat a 4 star rating.