ARC Review: The Duke of Snow and Apples 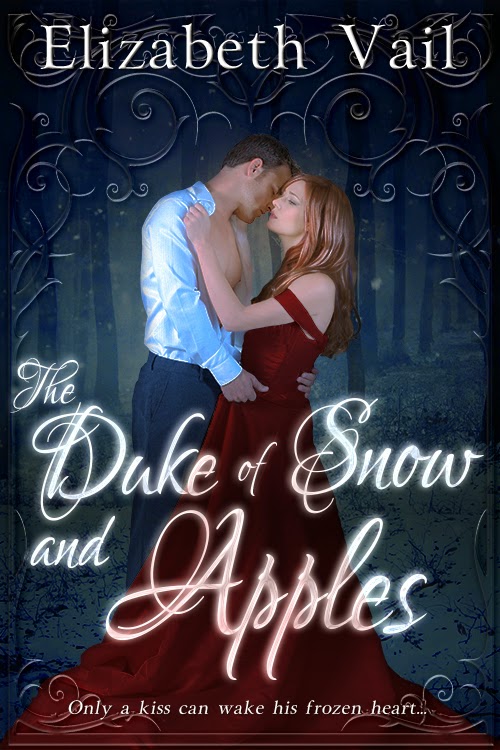 Amazon / Amazon UK / Barnes & Noble / iTunes / Kobo
Frederick Snow, first footman, is the perfect servant: efficient, hardworking, and completely bereft of emotion. Unbeknownst to his employers, he’s the lost Duke of Snowmont, on the run from a suspicious stepfather and a powerful magic he can only control by burying his passions beneath his frosty demeanor. He’s managed to hide behind his carefully ordered life until an impertinent miss arrives and challenges everything he thought he wanted.
If Charlotte Erlwood wants to land a wealthy, titled husband at her great aunt’s house party, she has to stop losing her temper – especially with inordinately handsome footmen. Perhaps if she recruits Frederick for her matrimonial schemes, she’ll be able to direct her attention toward suitable single noblemen and away from inappropriate dalliances. But Frederick’s frigid control is no match for Charlotte’s irrepressible spirit, and her passionate kiss could summon the darker side of his magic…or wake his heart from its frozen sleep.
My Book Review: Fredrick Snow was once someone important a long time ago, but that was then and this is now. Now he is the perfect servant to the Seven Dowagers. When he is assigned to be the footman to the grand-niece of one of the Dowagers he is determined to keep his perfectly icy veneer, but little by little Charlotte chips away at his frozen heart and with one kiss she awakens all the emotions he has left buried for years.

Charlotte Erlwood takes pride in who she is, or at least she used to. That was before her sister's betrayal though. Now with a agenda set in her mind, Charlotte is bound and determined to land herself a wealthy husband in order to save face. Not like other women, Charlotte is led by her emotions (which sometimes cause her to throw apples at unassuming footmen). A visit with her aunt in order to find a husband among the wealthy and eligible bachelors was all Charlotte intended but instead she gave her heart away.

The Duke of Snow and Apples is a wonderful fantasy romance with a bit of fantasy, history, and passion blended together to make this book a superb read. Fredrick Snow was a unique character blessed with an amazing ability. Fredrick is a handsome, kind, and sweet man but unfortunately for him and for Charlotte both, Fredrick is a lowly footmen. Although holding secrets that could ultimately change their relationship, Charlotte falls in love with the Fredrick she first meets, the footmen that she can be herself around instead of the prim and proper woman she acts like at events. Charlotte's character was quirky and sweet and I loved the fact that she took pleasure in the little things and that she could run with her emotions most of the time instead of locking them away. The perfect opposite to Fredrick, but that makes her all the more in sync with him.

Elizabeth Vail has written an amazing romance between a man and woman who society dictates should not be together due to class and status, and yet love can happen anywhere, at any time, and with anyone. I love the plot, setting, and characters and could go on and on about the masterpiece that is The Duke of Snow and Apples, but then I would give it all away ;) What I will say is I highly enjoyed reading this book and I recommend it to readers here at Bottles & Books Reviews. Four stars for The Duke of Snow and Apples, a book that will leave fantasies in it's wake.
at September 07, 2014