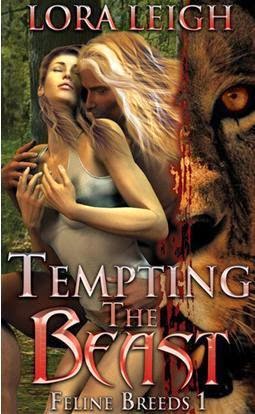 The Plot!
Callan Lyons is a genetic experiment. One of six fighting for freedom and the survival of their Pride. Merinus Tyler is the reporter who will tempt him, draw him, until the fury of the "mating frenzy" locks them into a battle of sexual heat there is no escape from.
Deception, blood, and the evil Genetics Council are hot on their trail. Callan will use his strength to try and save them both...and do all in his power to keep his woman in the process.

Tempting the Beast by Lora Leigh
My rating: 5 of 5 stars

I've been wanting to start this series for a long time.
Heard so many good things about it but i didn't know if the PNR thing really was MY thing.
I guess this proved i am totally a PNR lover!

Tempting the Beast is the first in this huge series and it captured me from the very start.

The two lead characters are Callan (the beast, half lion, half man)genetically created to be a massive threat weapon to those who had control of him.
And Merinus, the young reporter who wants to help Callan by exposing the people who created him.
She battles with her brothers and father and finally she gets her own way and starts a journey even she couldn't have thought possible.

The two characters end up locked together in a mating frenzy, and believe me it's a down right hot and dirty read.
I gather many have said it's tooooo 'out there' but pah! It's PNR erotica it's meant to be!!
I loved it!
I gotta say i fell in love with them both and the family that surrounds them.

The ending left me wanting to dive straight into the next book and so that is what i shall be doing!

View all my reviews

My Final Thoughts!
This was brilliant!
It's getting quite old now but i'd been wanting to start reading these for ages so i thought what the heck i'll just do it.
So glad i did, it's gonna be a crazy series!!
One click this fab book here!
at July 21, 2014