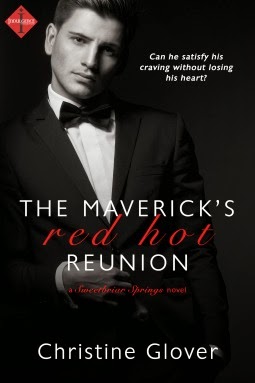 Synopsis: Corporate Maverick Zach Tanner returns to North Carolina to rebuild his dying friend's resort. He's got the money, the power, and the will to transform Sweetbriar Springs into a premier spa for the glamorous, but he doesn't count on the woman he once loved…and lost…to handle the construction contract. Zach thought he'd buried his desire for Kennedy five years ago. He was wrong, and now he’s determined to satisfy his craving...
Construction company owner Kennedy Gibson is eager to restore Sweetbriar Springs, but when she realizes Zach is her new boss she's terrified he'll learn the truth about their breakup so long ago. She vowed never to hurt him again, but she can't deny the passion he reignites in her. She wants to believe she has a chance for a different future with him, but will her secret threaten to destroy their red-hot reunion?
My Review:
Five years ago after the miscarriage of their daughter, she broke his heart and threw his engagement ring back at him. Now she's back in his life and although everything in him is telling him not to go there, he just cannot seem to help himself when it comes to her.

Zach thought he was over her, but now he thinks he's only over her when they don't have to see one another for years. As he wines and dines models and closes deals, Kennedy wears a hard hat and construction boots and manages her father's company. Now with their best friend bringing them back together can they manage to stay in control or will they give into the sparks flying between them no matter the cost?

I had never read a book by Christine Glover, but let me say this book is absolutely, positively amazing! The Mavericks Red Hot Reunion is just that: Red Hot! With the sparks flying between Zach and Kennedy it's a wonder the book doesn't spontaneously combust! The passion, the temptation, the heat between them leaves the reader breathless.

The secrets between them keep you on edge wondering when it will come out and what will happen next. The writing is superb, the romance is hot, and the characters are well written in a way that makes them complete opposites and yet completely perfect for one another.

I must ask, where can I find myself a Zach Tanner?

*A complimentary copy of this book was provided in exchange for an honest review.