The Depth of Beauty
Sinner’s Grove
By: A.B. Michaels 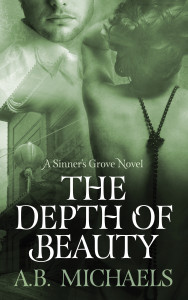 Blurb
A stand-alone historical novel, The Depth of Beauty follows on the heels of A.B. Michaels’ award-winning fiction debut, The Art of Love.

Born to wealth and prestige, handsome and successful in his own right, Will Firestone is the crème de la crème of 1903 San Francisco society. But when a business venture draws him into the city’s reviled Chinatown, his notions of what matters in life are tested in the extreme. With the help of an exotic young mother and a mysterious orphan, Will embarks on a journey of self-discovery, where love, danger and tragedy will change his life forever.

The Depth of Beauty is part of a dual-genre series, “Sinner’s Grove,” which chronicles the family and friends of a world-famous artists’ retreat on the northern California coast. The stories follow both historical and contemporary tracks, and can be read separately or together for greater depth. Other titles in the series include the contemporary suspense novels Sinner’s Grove and The Lair. 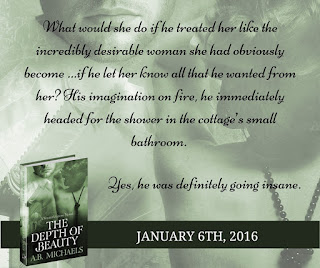 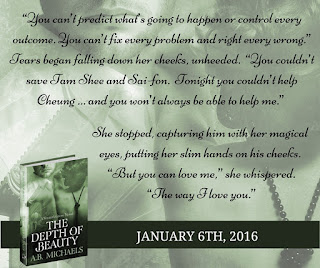 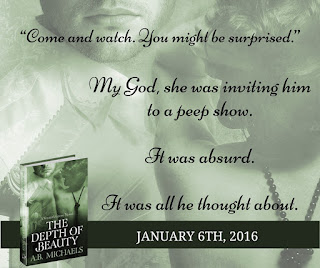 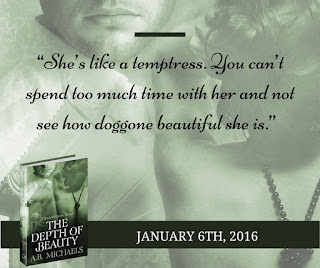 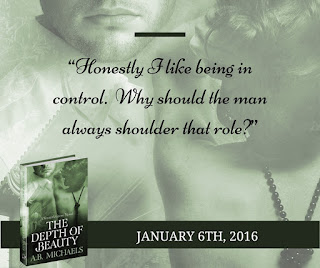 Book Excerpt
He emerged from the trees to see Mandy standing at the water’s edge. She was facing the ocean, so he could only see the back of her. She had taken off her shirtwaist and her skirt, leaving only her chemise and a petticoat. Her feet were bare and her rich, dark red hair flowed down her back.
She was bewitching.
She was trying without success to skip rocks into the calm water. Will’s own heart skipped. He knew he should respect Mandy’s privacy and leave, but his attraction to her kept him rooted to the spot. He watched her arms, those same pale, graceful limbs the baby doc had touched during the presentation. His fists coiled in response.
He couldn’t stand it. “I can show you a better way,” he called out, walking toward her.
Startled, she turned, and when she saw him, she too froze. She glanced at her clothing sitting on a piece of driftwood, and Will reflexively took off his own jacket. “Here,” he said, beginning to cover her as if she were a child. He paused, looking at the swell of her breasts beneath the filmy material of her undergarment. They were rising and falling with her rapid breaths.
She was anything but a child.
He looked up and lost himself in her almond eyes.
Mandy was the first to break the spell. “What did you mean, a better way?” she asked softly.
He stepped back. “Skipping rocks. Hard to do in the ocean, but it can be done.” He looked down at the sand where they stood. “First, find the flattest rock you can. Not too big, about the size of your palm.” He picked one up and stood close to her again, reaching for her hand, turning it over, and placing the rock in it. “You hold it like this,” he murmured, taking her fingers and wrapping them properly around the stone. He absorbed the feel of his hand touching hers and wanted to hold it properly, as a suitor would, even though he knew he couldn’t. He looked around for another rock to demonstrate the throw. “You stand like so, pull your arm back and flick your wrist, so that it spins. See?” He demonstrated and they watched his rock skip four times before disappearing into the water.
Mandy smiled with delight and looked up at him. “I want to do that!” she cried.
“Then give it a whirl,” he said.
It took several tries before she was able to skip a rock even twice, but she reacted as if she had just climbed Mount Everest. “I did it!” she crowed.
Will couldn’t help but grin at her enthusiasm. “I’ll attest to it,” he agreed.
They stayed in companionable silence for a bit longer until, once again, Mandy brought them back to reality. “I don’t think you came down here to teach me how to skip rocks,” she said. “Why did you come?”
He had practiced his little speech on the way down the hill. Why was he so loathe to begin it now? He took a deep breath. It had to be done. “I heard that Ethel Steubens quit and that you’ve, um, stepped into her place, as it were.”
Mandy’s voice lost its levity. “Who told you?”
“Peter Raines.”
She nodded. “I should have known. He’s beyond worried about what Lia might think.”
“So, he’s correct? You’ve been displaying yourself in the … altogether?”
She looked at him with the knowing expression of a woman twice her age. “Do you mean, have I been modeling naked?” She squared her shoulders. “The answer is yes.”
Something primal escaped him—something he had worked hard to control. “Well, you are damn well not going to do it anymore.”

Review
While not something I normally read, historical fiction is a genre that I find myself floating towards every once in awhile, especially when an amazing cover and an even better blurb catch my eye.
The Depth of Beauty is the latest book in the Sinner's Grove series by A.B. Michaels and I must say, I was hooked from the very beginning. The plot was interesting and the characters were intriguing. Set in the early 1900's, Will Firestone is trying to expand his shipping business into San Francisco's Chinatown. Born to privilege and wealth, Will has never lacked for anything.
In Chinatown, Will begins to meet immigrant Chinese and finds himself getting a dose of humility as he finds himself becoming close to a young orphaned girl. Mandy, fifteen years old has no one so Will and his sister, Kit, take Mandy in and care for her.
As the book takes place over the course of several years, Mandy blossoms into an incredible young woman. My favorite thing about Mandy's character and the way the author has written the story is Mandy's incredible insights and her journal entries that feature these.
An interesting story all around, The Depth of Beauty has a lot of angst, love and loss within this intriguing tale.

Author Info
Born and raised in northern California, A.B. Michaels holds master's degrees in history and broadcasting, and worked for many years in the public relations and marketing fields. An avid quilter and bocce player, she currently lives in Boise, Idaho with her husband and two furry "sons" who don't seem to realize they're just dogs