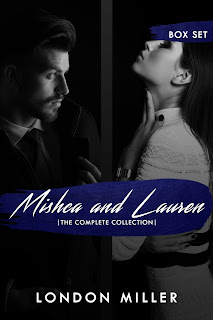 Purchase: Amazon | Amazon UK |Amazon CA | Amazon AU
Synopsis: Lauren was just a girl looking to make a fresh start in New York City, until she meets the man that will change everything she thought she knew. Spanning over two years, from the very beginning, until the sweet end, delve into the Volkov Bratva world and learn how it all began.
Mishca and Lauren: The Complete Collection contains the first three novels of the Volkov Bratva Series, as well as the companion novella... 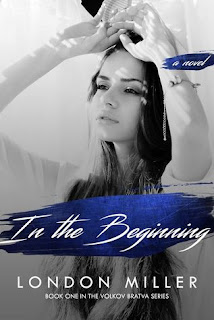 In the Beginning (Volkov Bratva #1)
Twenty-year-old Lauren Thompson left her small town in Michigan to begin a new life in the Big Apple where no one knows her name or the tragedy that had rocked her family fifteen years prior. With new friends and an intriguing new love interest, starting over is easier than she expected...but Mishca Volkov isn't what he seems. As the son of a Russian Mob boss, he thrives in a world of chaos and fear, earning the title of Bratva Captain through blood and pain.
When the two cross paths, lines blur and passions ignite, bringing them closer than they could ever imagine. Until secrets from the past threaten to tear them apart. Can they fight past their demons...or were they doomed by fate before they ever met. 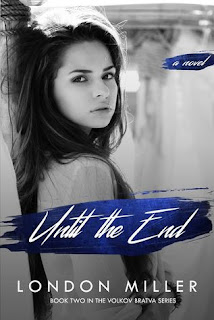 Until the End (Volkov Bratva #2)
Lauren Thompson
After learning the truth behind her father's tragic murder, Lauren vowed never to go near another Volkov again, but sometimes matters of the heart are too strong to resist...
Mishca Volkov
As a Captain in the Volkov Bratva, Mishca has pledged his loyalty to the Vory v Zakone, but he soon finds himself at odds with the life he's always known...
Until the End
When Mishca and Lauren fight to salvage their relationship, new obstacles present themselves, forcing the pair to make drastic choices that either tear them apart or bring them closer together... 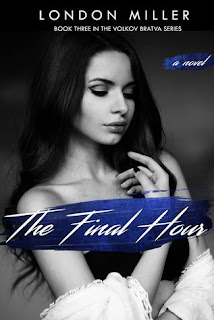 The Final Hour (Volkov Bratva, #3)
Three months pass without incident, leading Mishca and Lauren to believe they can finally move on from the past and build a life together...but enemies both old and new lurk in the shadows, waiting for the opportunity to strike.
When a dangerous threat presents itself, Lauren is forced to turn to the one person that would rather see Mishca dead than live happily ever after...she now has to step into a role that demands payment in blood.
Alliances are formed, one side fighting for survival, and the other for retribution.
No one can be trusted.
No one is safe.
War is coming.
...and not everyone will live to see the end of it. 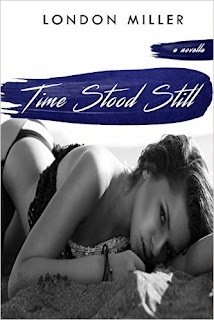 Time Stood Still (Volkov Bratva, #3.5 Novella)
Can a love born of violence stand the test of time?
Despite a less than ideal start to their marriage, Mishca and Lauren are finally in a place where they do not have to look over their shoulders at every turn. Now that they are in a secure place, it's time for them to have the one thing Mishca had promised her before they took their vows.
A honeymoon...
Traveling to the sandy beaches of Sardinia, Italy, the couple will explore what brought them together in the first place, instead of the life that constantly threatens to tear them apart.
But as the newly appointed Boss of the Volkov Bratva, is it too late for Mishca to have an even remotely normal life...and is Lauren ready to face another challenge that neither of them saw coming... 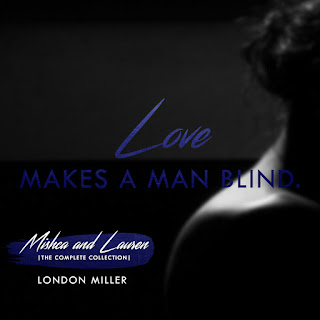 EXCERPT-
More importantly, was the man seated behind the cherry-wood desk. He was in his late fifties from what Mishca had told her, but just by looking at him, she wouldn’t have guessed that. His eyes were a dark gray, his black hair graying at the temples. Upon seeing her, he smiled, standing to his full height, which was just a few inches shorter than Mishca, and came around the desk, extending his hand.
“You must be Lauren,” he said coolly, his accent much thicker than Mishca’s, making Lauren have to concentrate to understand him. “It is nice to finally put a face to the name.”
“Nice to meet you, Mr. Volkov,” she said, taking his hand. He had a firm handshake despite his age, and made quite the imposing sight. Whereas Mishca was lean, he was built like a bull.
“Please,” he said, waving a hand. “There is no need for such formalities, call me Mikhail. I trust you have met my wife, Anya.”
“Yes,” she replied, smiling over at Anya.
“Please have a seat,” Mikhail offered, gesturing out to the comfortable looking wingback chairs that were grouped together near the fireplace. “I must confess,” he went on after they were all seated, “when Mishca told me he was going to bring a girl here, I was astonished. I have never met any of the girls in his life.”
Lauren’s brows shot up as she glanced at Mishca. A muscle ticked in his jaw, but he didn’t comment.
“He must care for you greatly to bring you here.”
Mishca scoffed. “You’re going to scare her off.”
Mikhail’s face split into a grin, his eyes warming. “Nonsense. It is a reasonable assumption, no?”
They broke out into a heated discussion in Russian, snapping back and forth, but while Mishca seemed to be growing angrier, Mikhail only appeared amused.
“Would you care for something to drink, Lauren?” Anya asked, cutting in over them, walking over to an antique whiskey service that held several carafes of dark Amber liquid and a couple bottles of water.
She looked between Mishca and Mikhail, shaking her head. “No, I’m fine. Thank you.”
Mikhail turned his attention to the bay windows as a car drove up. “It looks like your sister is here. Could you escort her in?”
Mishca hesitated, his eyes flickering to Lauren, but he ultimately stood and walked out without glancing back.
“You’ll have to excuse my son,” Mikhail said conversationally, as he accepted his drink from Anya. “Love makes a man blind.”
She was momentarily taken aback by what he was saying. To be honest, she had never thought that they were there in their relationship.
“You don’t think so?” He asked reading her expression. “You are more important to him than you realize.”

When I began blogging, a London Miller book was one of the first books I had ever read. In fact, it was my first organized crime book. Up until that point, I had heard of organized crime books, but I had yet to pick one up. When I first read the synposis for In The Beginning, I KNEW, I just knew, that I needed to read it. Despite never having read this trope before, something stuck in my head. Once I began reading, I was hooked. London Miller drew my attention almost immediately with her writing style, her intriguing storylines and characters that I loved. Both Lauren and Mishca appealed to me and despite Mishca being a part of an organized crime syndicate, I fell head over heels in love with him, this perfectly imperfect and intriging character that London Miller had thought up and brought to life in a way that made my heart pitter patter.
Have you ever read a book and had it stay with you for days, weeks, and months to come? This was THAT book for me. Through the next few months even though I read other books, Mischa stayed in my heart. London Miller had done something that no other author had done to me up to that point. She made me fall in love with a character. She gave me my first book boyfriend. Lord knows, he wasn't perfect. He was the ultimate bad boy in some ways, but there was something about him that called out to me.
Reading The Mishca and Lauren collection made me fall in love all over again with Mischa. Miller's writing captured him perfectly as the series continues. Lauren, still continues to amaze me with her bravado and spunk. While she should be terrified in this world of criminals, she manages to hold her own against them. Together Mischa and Lauren make such a wonderfully appealing couple. And not to mention, Miller's writing is still as intriguing as ever and drawing readers in from the first page to the last. 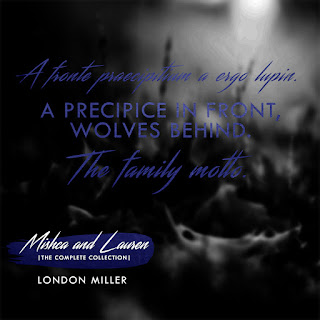 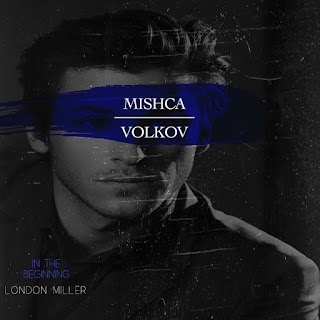 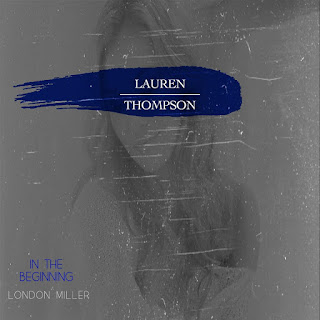 With a degree in Creative Writing, London Miller has turned pen to paper, creating riveting fictional worlds where the bad guys are sometimes the good guys. Her debut novel, In the Beginning, is the first in the Volkov Bratva Series. She currently resides in Atlanta, Georgia with her husband and two puppies, where she drinks far too much Sprite, and spends her nights writing.
Website | Facebook | Twitter | Goodreads | Newsletter | Amazon Author Page 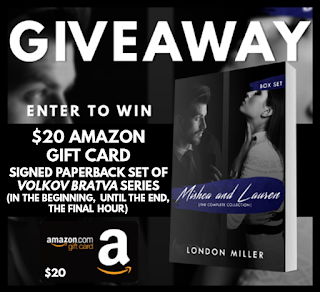