Trilogy Tour: One Urge, One Plea, Keep Me by Scarlet Wolfe 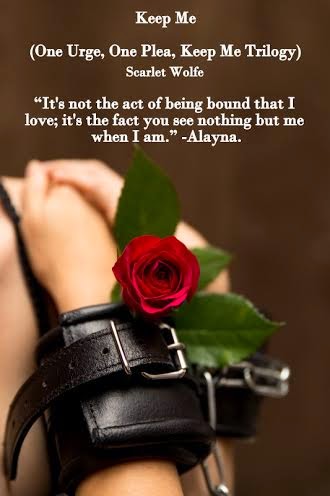 In the first novella to the One Urge, One Plea, Keep Me Trilogy, romance author, Alayna Wynn, is anxious over being a bridesmaid in her best friend’s wedding. She’s also cynical, having sworn off men two years prior when the only relationship she had ever known ended abruptly.
Alayna has no idea her anxiety will be brought to a higher level when she meets the groom’s friend, Damon Lear, at the rehearsal dinner. She’s surprised to learn he’s a famous writer of erotica and also the owner of one of the largest publishing companies in the world. His mere presence has her fleeing to the restroom to calm her nerves.
Damon is taken aback by his instant desire for Alayna. A secret buried in his past keeps him out of relationships and into behavior that is taboo to many, but he wants her and is willing to set his strict rules aside for one memorable night. After a failed attempt at propositioning Alayna, he’s determined they’ll at least share one heated kiss until they meet again, and he doesn’t hesitate to assure her they will.
Three months later, Damon gets his opportunity to seduce her when he rescues Alayna, keeping her from being stranded in an airport for days. Unable to leave Damon’s penthouse, she discovers it is impossible to resist the sexy, mysterious man who wants nothing more than to make her submissive, giving him the control he needs to fulfill his fantasies.
Alayna finds herself desperately wanting to please a man she knows little about while Damon struggles with his inability to let her go. What will happen when Alayna asks for a little more than Damon is willing to give?
“You’ll be stronger, Alayna, having explored the part of you that you’ve been afraid to know. You’ll beg me not to stop, and when leaving here, you’ll believe you’re the gorgeous, sensual being I see in front of me.”


I bring her head back down, and her eyes meet mine, displaying a mix of longing and fear.


“Don’t look away from me again, Alayna. It’s too late for you to wimp out now. It’s a shame you’re uncomfortable with me admiring your beautiful face.”


“That’s not it,” she says with a biting tone.
“What is it then?” I’m curious, surprised she spoke.
“I don’t want to admire yours. I don’t want to want you.”
“Why?” I clamp her wrists harder and push her head inches from mine.
“I’ll get attached, and you’ll leave me hurt.” Her breath whispers across my lips, leaving me unable to resist kissing her again. This time it’s controlled and slow, our tongues exploring, tasting, and getting acquainted in a profound way before I pull her back again.
“You’ll be stronger, Alayna, having explored the part of you that you’ve been afraid to know. You’ll beg me not to stop, and when leaving here, you’ll believe you’re the gorgeous, sensual being I see in front of me.”
Alayna’s POV
“Wake up, Alayna.”
My eyes fly open when I hear a whisper in my ear. Damon is hovering over me. I can’t see his dark irises or his jet hair, but his heavy breath is on my neck.
“Damon. What are you doing?”
“Do you trust me?”
“Yes.”
His lips graze from my ear to my jaw and then to my lips before they brush ever so gently across mine.
“I thought you didn’t want me.”
“I never said that, but obviously you need more convincing, so let me work on it.”
My heart and lungs battle over who’s the loudest.
“OK.”
“I’m tying you up. You have eager hands.” 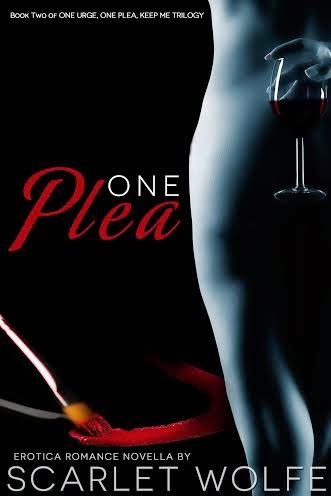 In One Plea, the second erotica romance novella in the One Urge, One Plea, Keep Me Trilogy, Alayna Wynn has returned to her home in St. Louis. In an attempt to regain the control she had relinquished to Damon Lear, after being stranded at his penthouse during a snow storm in New York, she delves into her work.


Damon attempts to move on after Alayna leaves but finds himself distracted, consumed with thoughts of her. Living the way he did before she walked in and out of his life now seems impossible, and when he catches wind that Alayna will be returning to New York to see another man, he’s filled with jealousy.


Their lifestyles start to blend as they learn to meet each other’s needs, but they’re soon disrupted by secrets from Damon’s past, and one could even put Alayna’s safety in jeopardy. He is left to make tough decisions when someone threatens to leak information that could cost him his reputation, business and possibly Alayna.
Be prepared to feel your face warm as she and Damon explore their mind-blowing chemistry. His strong desire and Alayna’s defiance cause him to push limits. Damon introduces her to a cocktail of pleasure and pain as she exposes his heart to something foreign and undeniable. *Warning* This novella is explosively hot!

Damon’s POV
This woman’s backside is to me. I run my hand up into her hair, but it’s not thick and lush like someone else’s I know, so out of frustration, I yank it, bringing her head to the side. I run my tongue along her ear and down her neck, causing her to whimper.
Sliding my hand around to her front, I feel that her nipple is rigid, so I tug it between my fingers. She whimpers again, and I’m becoming angry, so I tighten my grip on her hair and tug her nipple harder before letting it go.
She moans this time, enjoying the pain. I’m pissed off, furious because I have a craving to paddle this woman’s ass until it’s fire red but only to hurt her, not for pleasure. And no part of me wants to fuck her. What I’m doing already feels like a chore.
This place is elite. It’s masked as an event venue you’d rent out, and the number of public officials who are members keep it from being shut down. I haven’t been here since a few days before Alayna stayed with me. I thought I was ready to return, but I was wrong. I’m not even undressed, and my hard-on is gone.
Alayna’s POV
After he calms, he pulls my wrists down between our chests and unhooks the belt. Throwing it to the floor, he collapses onto me. My arms instinctually wrap around his back, and he lets them.
“How you respond to me, Alayna, drives me wild.” His face nuzzles between my neck and hair, and I’m surprised when he relaxes, giving me the time to bask in the feel of his solid wall of strength and most importantly, the intimate moment we’re sharing.
“I’m taking you to dinner, and I want you to wear your black dress. I didn’t get to remove it last night.”
“I can’t; it needs laundered.”
Damon lifts his head to look at me.
“I had Margaret take care of having it cleaned while you were out today.”
“Um, OK. I appreciate the gesture, but do I have no privacy where you’re concerned?”
His face goes back into my hair. “Have I told you how good you smell?” he asks in a muffled sound.
I begin to giggle and feel him smile against my neck as he aims to distract me. How will I ever have a say with this man? 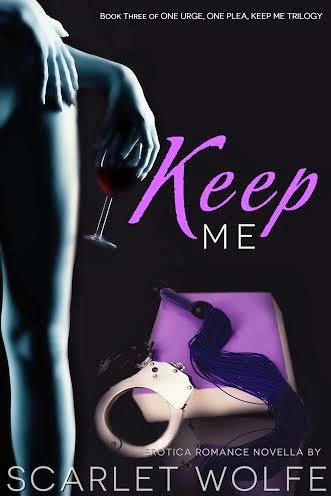 “Tie me up, so I can be free.” –Alayna.
In the third installment of One Urge, One Plea, Keep Me Trilogy, Damon Lear has Alayna right where he wants her. He has temporarily moved her into his penthouse, so he can spend more time with her and keep her safe after receiving disturbing emails at work, blackmailing him and insinuating that he might not get to keep what he wants.
Details from Damon’s past are leaked to the media, forcing him to take Alayna away to his second home and share with her his darkest secrets. Their relationship is threatened yet again when he chooses to withhold the most painful parts.
Their exes resurface, family interfere, and paparazzi stalk them, causing chaos. During it all, Damon battles to hold on to control by pushing Alayna sexually, introducing her to new, enthralling experiences. He soon discovers he’s losing the hold on his heart when he witnesses Alayna fighting for the both of them and submitting to him completely.
This is a sexy and steamy erotica romance with BDSM. One Urge and One Plea must be read prior to reading Keep Me. For a mature audience due to explicit sexual scenes and harsh language. 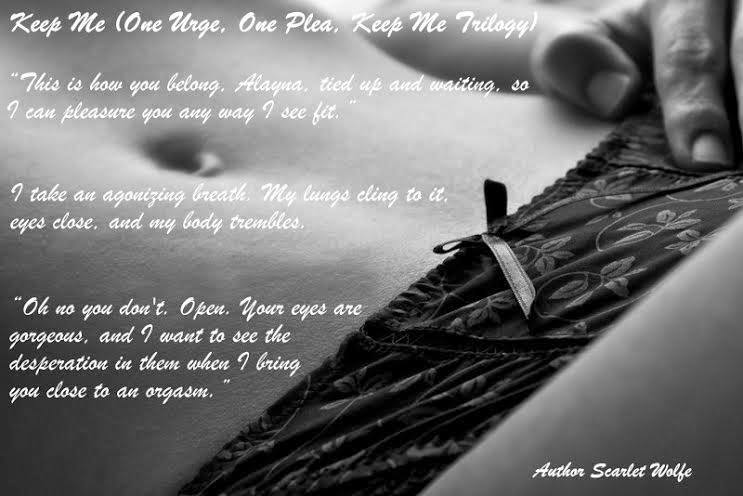 Damon’s POV
Alayna and I have been working a couple of hours when she marches into my study and sticks out her hand.
“Damon, I want my phone. I can’t stop obsessing over how worried my family has to be. I need to let them know I’m OK.”
In frustration, I run my hands down my face before reaching in the drawer next to me. I pick it up and hand it to her across the desk. After turning it on, she appears to be counting as she scrolls the screen. I watch her go from unsettled to panicked.
“Dammit, Damon. I have thirteen missed calls and eighteen text messages. My parents and brother are going to kill me. Oh, and let’s not forget Felicia.”
Alayna bites on her nail as she studies the phone. She better cut it out. I’m already thinking of bending her over this desk for making demands.
“Holy shit.” Looking astonished, she covers her chest with her hand.
“What is it?”
“My ex, Michael, texted me. He claims he might come to New York. He said he’s worried about me.” She finally glances up. “Am I already on the news?”
“Yes. George told me only a few minutes ago. Your ex might as well keep his ass in St. Louis. He’s not getting near you.”
She walks out of my study without a word, and I hear her run up the stairs. I’m sure she’s going to call someone, and it better not be him. Our peace and quiet is over. brought to you by: