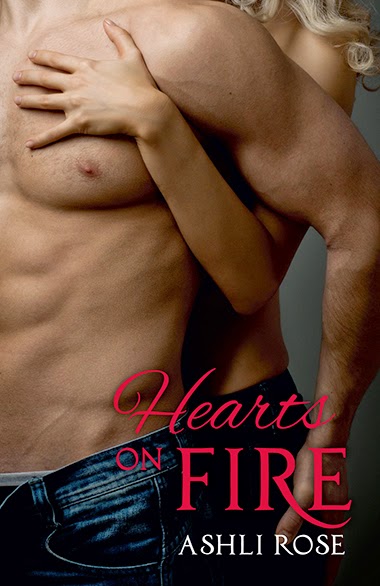 It has been five years since Ava Kingston left her parents’ house in New Jersey. She ran and never looked back, all because of one night. One night that could’ve changed her life forever. Now living in Chicago, working as a journalist, Ava thinks her life is finally where it should be. She is working toward a promotion, has a great family, and a few amazing friends. What more could a girl want? Just when Ava comes to a calming sense of closure in her life, her past reappears in the form of the Hunks in Uniform calendar. Will Ava’s feelings for this fearless firefighter resurface against her better judgment? Or will Ava try to forget the one person she ever really loved?


Gavin Sawyer is a Chicago firefighter who is stopping many women’s hearts as a model for the Hunks in Uniform calendar. Gavin only tried out for the calendar because of her—the one person who knew he was worthy of such prestige. He knew how much she wanted him to do it, but then she was gone. Without a warning, Ava left Gavin behind with a broken heart and bruised ego. He loved her, but she ran. One night separated them forever. Now, five years later, Gavin will stop at nothing to win her back. A chance encounter with Ava sets his heart on fire and proves that old feelings really do die hard. 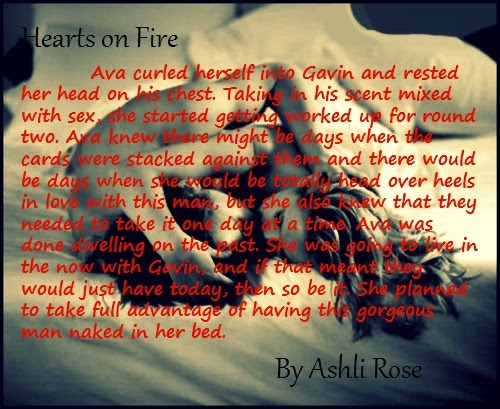 Excerpt:
“Come on,” Gavin said as he pulled her over to a group of people gathered around two men singing “Imagine” by John Lennon. Ava turned to Gavin with a look of shock. He remembered. She had told him in conversation the week before that she loved classic rock, especially The Beatles. She also told him that if she ever had a daughter, she would name her Lennon. Thinking back on it, Ava was surprised Gavin asked her out after that comment. Ava held Gavin’s bicep and laid her head against his arm. She closed her eyes and listened to the two men sing one of her favorite songs. At one point, she began to sway, and she felt Gavin pull her into his body. It felt right being with him. Their bodies fit together perfectly, and she didn’t want to break contact with him. Fire was shooting through her veins, and she couldn’t believe that someone’s touch could do this to her. When the two men were done, the crowd erupted in a loud applause. Ava didn’t notice, but she had been crying. That song always did it to her.
“Are you OK, Ava?” Gavin asked as he wiped a tear with the pad of his thumb.
“I’m fine, Gavin. That is my favorite song, and I always get emotional when I listen to it. That was amazing. Thank you.”
“Of course, but you haven’t seen the best part.” Gavin pulled her through the crowd, and in the middle of the circle was a huge peace sign made out of stone with the word “Imagine” in the middle. Along the outside of the peace sign was a bunch of different flowers outlining it. This truly was amazing. Ava could only imagine what John Lennon would’ve been capable of had he been alive today.
Ava looked at Gavin and reached up on her tippy toes to kiss him on the cheek. “Thank you, Gavin. This has been the best date ever.”
Gavin held Ava in his arms and kissed the top of her forehead. “So, could we add this to the list of things that you like?”
Ava laughed into his chest. “Yes, Gavin, we can.”
The next moment happened so quickly Ava didn’t even realize what was going on. Gavin dipped Ava back and planted a sweet kiss on her lips. Thankfully, Ava didn’t scream when it happened, because the kiss probably wouldn’t have been as amazing. Gavin’s lips were so soft against hers, and they tasted like mint and lemons. Ava cupped her hands behind his head and opened her mouth so Gavin could deepen the kiss. Gavin’s hand was on Ava’s lower back, and the other was behind her head. They continued their kiss, dancing with their tongues. They would’ve kept kissing if it weren’t for the applause and whistles they heard around them. They broke their kiss, and Ava buried her head in Gavin’s chest once again.
“Good job, man!”
“Get a room!”
Gavin just waved to everyone, and Ava pulled him toward the street.
“Oh my god. That was so embarrassing,” Ava said with a slight blush in her cheeks.
“Was it really that bad kissing me?” Gavin asked with his hand over his heart, faking insult.
“No, the kiss was amazing. I have never done anything like that in public before.”
Gavin pulled Ava closer. “Good. I like that I was able to share that with you. But, I promise, Ava, the next time I kiss you will be behind closed doors, and I will not stop there.”
Ava’s cheeks burned, and she knew she was red. The thought of Gavin’s lips on hers again was causing a stir in her belly. She wasn’t the type of girl to sleep with someone on the first date, but she could make an exception for someone who made it the best date she’d ever had.
If this date gave Ava any clue as to how their relationship would be, Ava was going to be one lucky girl.
© Ashli Rose, Hearts on Fire 2014 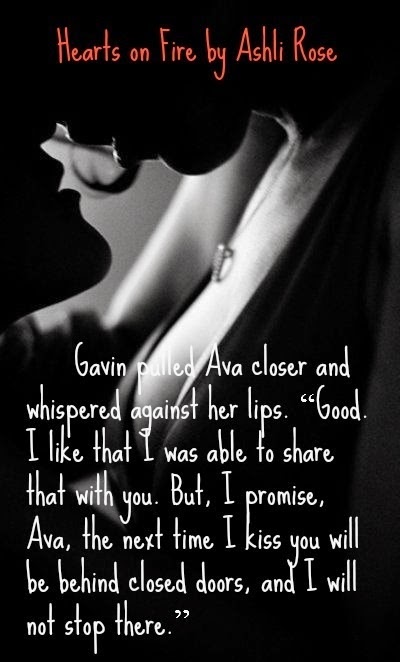 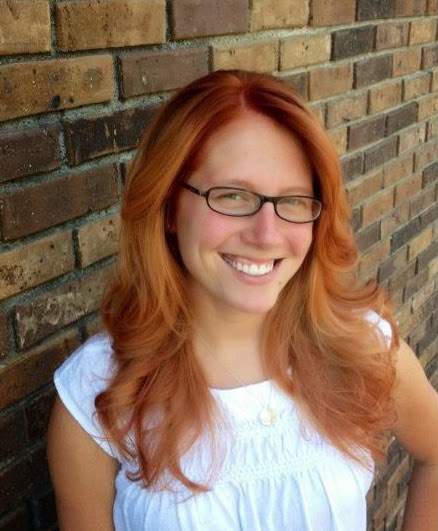 Ashli Rose is the author of the new novel Hearts on Fire in the Hearts on Fire Series.
A Jersey girl born and raised, Ashli lives in Bergen county with her husband Patrick and two year old daughter, Laila. She loves spending time with her family, watching teen shows(She’s a sucker for PLL and Teen Wolf), taking pictures of her daughter, and shopping for shoes that she will never have enough money to buy.  Ashli is obsessed with all things Michael Kors and would purchase all of his bags if she could.
Ashli graduated with a BA in English from NJCU and during the day she is a Pre-K teacher to 30 energetic four and five year olds. Between them and her two year old it's a miracle that Ashli found the time to write this book. It has always been a dream of Ashli’s to write a book, it wasn't until the New Year that she decided to make that dream a reality.