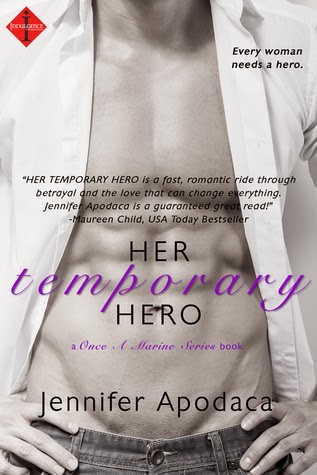 
Synopsis: Former beauty queen Becky Holmes and her baby are on the run from her dangerous ex. With her dreams of love and marriage destroyed, she’ll do anything to protect her child…even agree to hide out in her boss’s cousin’s house while he’s away.
Wealthy, sexy, and emotionally haunted Logan Knight needs a temporary wife to get his land, per his dad’s rules. No wife, no inheritance. But when that wife lands on his doorstep and comes with a baby, his darkest memories are triggered. He tries to keep his distance, but his efforts are shattered when he starts to have real feelings for his fake wife and child.Just as Logan begins to think he may have a future with Becky, his attempt to have it all backfires into a betrayal that forces Becky into a heart-wrenching choice no woman should ever have to make.


MY REVIEW:  With a baby girl, only a few months old, and an ex hellbent on revenge, Becky Holmes is a single mom in need of a hero and a safe haven.

Logan Knight, an ex-Marine working security, is trying to escape his own demons and make a life for himself and help those who have suffered PTSD. According to his father's rules he needs a wife in order to secure his land. When Becky walks into his life unexpectedly this may be the perfect solution for them both. He can help her and in return he receives his land.

When these two come together, they will turn up the heat, but what happens when they realize their marriage means more to them than land and safety?

I absolutely love Her Temporary Hero. Prior to reading Her Temporary Hero, I had never heard of the Once A Marine series, and now I need more! Apodaca's writing is tremendous and has you immersed in the story before you even turn to the second page.

The characters in Her Temporary Hero come right off the page and to life. Logan has his demons, but seems to have them under control for the most part. As much as he would like to be gruff, he comes off as sweet and as much as he wants to steer clear of Becky's daughter, she ends up wrapping Logan around her tiny little finger. The moments between Logan and Becky's daughter are very sweet and heartwarming.

From beginning to end I was drawn into Logan and Becky's story hoping for the happy ending. I loved Her Temporary Hero and the only complaint I would have to make is that sometimes the baby acted a lot older and more aware than a three month old usually is. Other than that minor detail Her Temporary Hero was a great read that I highly recommend.

I give Her Temporary Hero 5 stars!

*Her Temporary Hero was received from Entangled Publishing in exchange for an honest review.