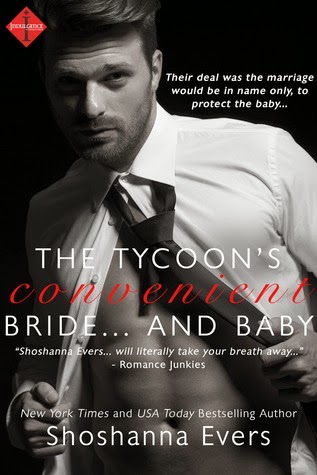 Synopsis: After her brother and his wife go missing and are presumed dead, Lauren Peters plans to raise their infant daughter. Her brother’s will, however, stipulates that baby Callie can only be raised by a married couple. Lauren’s as single as they come.

Mack Hansen can’t stand idly by while his business partner’s baby is thrown into a foster home. As he sees it, there’s only one solution—he and Lauren will marry for the sake of the baby—and he’ll keep his attraction to her at bay.
Lauren knows that Mack is all about business, including their marriage of convenience. But her unexpected feelings for him have her turned upside down. With passion sizzling between them, can Mack keep Lauren from stealing his heart…and becoming his wife for real?


My Review: Lauren Peters never thought she would have a family and in an instant she is giving an instant one.

Mack Hansen never thought he would give up his playboy ways after seeing what had happen to his father when his mother left, but all that changes when Lauren agrees to be his bride in order to raise her niece and his god daughter, Callie when Callie's parent disappear.

Lauren had fantasized about Mack for years, but never once did she dream she would be married to and raising her niece with him. Although a marriage of convenience she can't stop herself from falling in love with Mack.

The Tycoon’s Convenient Bride… and Baby will have you falling in love. Shoshanna Evers' pairs two amazing characters together and throw a baby in the mix and you can't help but to fall in love with this book!

Lauren and Mack are both passionate about their businesses. Lauren loves her daycare children and dreams of expanding to have more children. Mack, although a ruthless businessman with a knack of finding perfect properties, shows that money doesn't mean as much to him when it comes to the people he cares about.

I thought Mack was incredibly sweet when it came to Callie and I absolutely adored the fact that he googled how to take care of a baby and managed to put her diaper on wrong. Callie and Mack together were just adorable, just like a real dad and daughter.

I did feel bad for Lauren after finding out the reason her ex broke up with her and about her personal problems. I rooted for her to have her family and her happily ever after and she definitely found that.

This was my first Shoshanna Evers' book, but will not be my last!

I wish I could give this book more than 5 stars, but alas I cannot, so even though I am shouting a big 10 in my head, I give The Tycoon’s Convenient Bride… and Baby 5 stars!