Book Review: One Night of Sin by Elle Kennedy 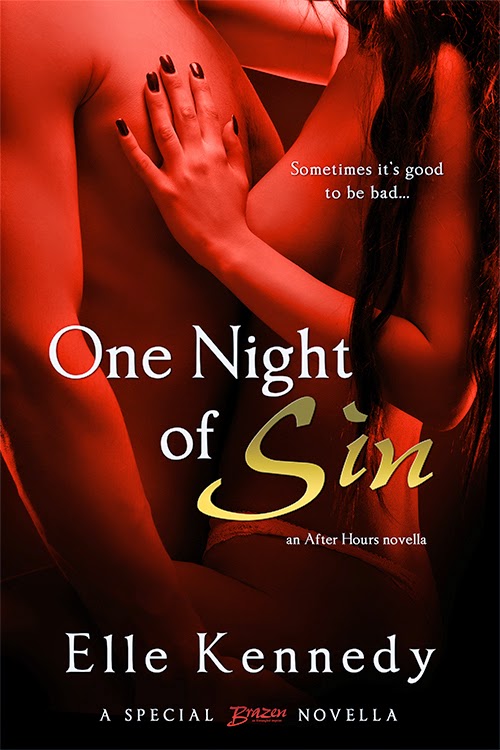 Synopsis: Sometimes it’s good to be bad.
When it comes to sex, good girl Skyler Thompson always plays it safe, choosing stable and sedate over wild and thrilling. She doesn’t do one-night-stands, but one look at sinfully sexy Gage Holt and she’s willing to reconsider. He makes her want to be bad for once in her life, and she’s prepared to take what she wants.
Danger follows former MMA fighter Gage Holt like a shadow. Despite his successes as part owner of Sin, an exclusive nightclub in Boston, Gage can’t risk getting involved with a woman, especially one as sweet as Skyler. Still, he can’t resist a taste—and it’s so damn good he has to see her again.
As addicted as he is to her, Gage knows there’s no future for him and Skyler—not with his past lurking in the dark corners of an MMA cage. But Skyler’s tougher than she looks, and she’s ready to fight for her man.
My Book Review: Skyler is a good girl in need of a fun time for once. Gage is a former MMA fighter who is now under a mob guy's thumb trying to save his family - or at least what is left of it. When these two come together the sparks fly, the passion ignites and the question is will their hearts go up in flames or will the embrace their passionate chemistry and find love with one another?

Elle Kennedy's One Night of Sin is hot and steamy with a side of "oh my God, my book is on fire!". The chemistry between Gage and Skyler heats the pages up in this sizzling novella and leaves readers fanning their faces and needing a nice cold drink by the time the book ends.

Gage is a hot (and built. Don't forget that part!) former MMA fighter who runs a night club now with two other former fighters. Skyler is an intelligent woman looking to let her hair down and have fun for once and her eyes are set on Gage. Once these two come together there's no turning back.

Miss Kennedy creates fire with her characters. The characters themselves are both complete opposites, but at the same time they are exactly what the other one needs. They both have their own demons in their closet and while those demons aren't the same per-say, they help each other understands and face those demons head on.

I loved the characters, the passion, and the good, intelligent girl with the brawny, handsome fighter. Quite the pairing if you ask me.

One Night of Sin is one FIVE STAR book you do not want to miss.