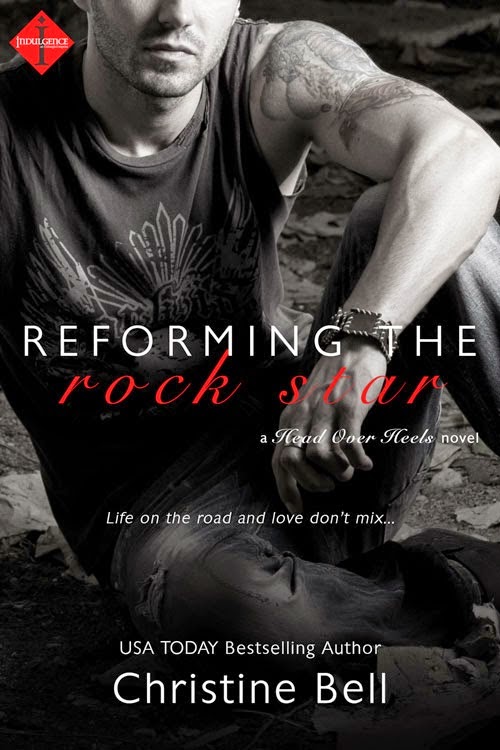 When Sydney Metcalf’s bestie asks her to cater her wedding, Syd can’t say no, even though the thought of going back to her hometown makes her break out in hives. She’s off to a great start until best man and rock god Lazlo Stone calls with a request for her to cater the bachelor party too. Petit fours adorned with rose petals, she can handle. A cake shaped like boobs for the sexiest guy in the universe? She’s not so sure. But this is the chance of a lifetime and she refuses to screw it up by being a prude…
When a sexy stripper dressed as a Plain Jane crashes the bachelor party, Laz is all about getting vertical and making some music with her. Too bad his stripper is really the caterer and the bride’s best friend. After a kiss between them blazes out of control, he can’t seem to stop thinking about sweet little Syd.
But everybody knows, rock and roll and love don’t mix…

My Review: She's a plain jane in a girl next door type of way while he's a rock star playing sold out shows, but the attraction between sweet Sydney and rock god Laz is undeniable from their first meeting.
Sydney, a caterer who always wanted to be better than her old hometown and the trailer trash she was known as, has come along way. Successful, sweet and smart, Sydney is the full package. When she's asked to cater her best friend's wedding week, she can't say no.. Even if it means going back home to the place where it all began. However before the week is through going home may be the best thing that has ever happened to Sydney.
Laz has it all - the money, the fame, the girls. But when he meets Sydney he's undeniably attracted to the beauty she doesn't even seem to know she possesses. Sydney isn't like the girls he's know to be with, she's more. Before the end of the week is up Laz finds himself wanting more out of Sydney than he's wanted from any other girl since his ex.
Can a simple caterer and a rock god make a life together or will it be too much for the both of them?
Reforming the Rock Star is sexy, humorous, and sweet. With characters that you can fall in love with, a not so typical love match, and a sweet plot, this book has it all. Author Christine Bell showcases her amazing talent in this second book from the Head Over Heels series.
With moments that will make you laugh and moments that will leave you with an undeniable desire to know what happens next, you won't be able to put Reforming the Rock Star down!
5 STARS for Reforming the Rock Star!
at October 04, 2014