Book Blitz: Because of Lucy by Lisa Swallow 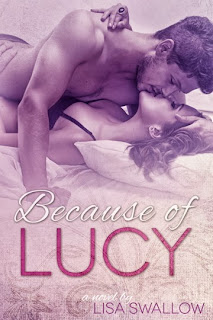 "In life, there are some people you have to lose in order to find yourself."

Ness’s parents are shocked when she turns down her place at Leeds University and takes on a full-time job in a call center. Determined to begin her adult life the way she wants, Ness moves to Leeds to live with her best friend Abby.

One night she meets Evan, who is everything she hates about guys. He may be hot but he’s also drunken, arrogant, and on top of that, he apparently has sex with girls and forgets about it. But Evan isn't what he seems and Ness soon discovers they have more in common than she thought.

Evan is struggling to escape from his past too, and when Lucy appears she threatens his new relationship with Ness. Unsure if she can deal with the effect Lucy has on Evan, Ness makes a decision about her future which pulls them apart.

When their new lives don't go as planned, Ness and Evan are both faced with difficult choices. All because of Lucy.

Because of Lucy - Extract

I side step the sink and turn. A guy leans against the doorframe, trying to appear nonchalant but his slackened stance indicates he’s attempting to keep himself upright. His brown hair is longer at the front and spills into his face, and unfocused brown eyes appear to be looking in my direction. He’s one of the regulars. I don’t pay a lot of attention, but he’s a good-looking guy and they never go unnoticed.
“Yes?” I snap. I’m so not in the mood.
His eyes sweep my figure. Unbelievable... I straighten my sleeves and look at him with an eyebrow raised.
“Are you Abby’s housemate?”
“Who are you?”
“Evan.” He rubs his nose. “You’re not a student?”
“Correct, I am the one not lying in a drunken haze on the floor contemplating my navel.”
Evan takes a step forward, steadying himself with one hand as my witty repartee sails over his head. “Why?”
“Why am I not on the floor pissed?”
“Why aren’t you a student?”
“Because I work instead.”
“Hmm.” He pauses and grasps onto the sink, searching for a glass. I pass him the spare one. “Did you fail?”
“Fail what?”
Evan fills the glass. “Or are you just not smart enough for uni? What is it you do?” He gulps the water in three mouthfuls then wipes his mouth with his hand.
Arrogant wanker.
“That’s right, I’m not smart enough. I’m living with Abby until I can find a nice man to marry then I can have 2.4 kids and a house in the suburbs. Because, as I’m not a student, I have no future.”
Evan leans against the sink. “Fair enough.”
Oh my god he believes me. How pissed is he exactly? “So, you think anyone who doesn’t go to university is inferior to you?” I demand.
I’ve seen her friends looking down their noses at me. Inverted snobbery. On top of that, the locals hate students and the students hate locals. I’m neither. I can’t win.
We’re close now and he stinks of alcohol and pot, a faint hint of deodorant lingering on his clothes. Evan’s T-shirt has come untucked and rides up as he leans against the sink. He’s toned, evidently works out. I can’t help myself, I check him out. Beneath his curls he has deep brown eyes. Incoherent eyes. I hate to admit, but something about him is seriously sexy.
Even if he is a dick.
“Well, if you’ll excuse me,” I say.
He sniggers.
“What’s funny?”
“You sound like the Queen.”
Not this again. I get enough crap at work. I move from Cheltenham to Yorkshire and suddenly I’m ‘stuck up home counties girl’.
I don’t dignify his comment with an answer and turn away from him, and walk out of the kitchen.
“Want me to get the guy out of your bed?” he calls after me.
I stop and look round. “You know him?”
“I could replace him.”
My mouth drops open at his arrogance. An attempt at a flirtatious smile plays around his lips but the unfocused eyes kill the effect he’s trying to achieve. He’s serious. I imagine he has a ready supply of eager girls. No surprise with a body and looks like his, such a shame he needs a personality transplant.
I step towards him. “Evan. I am not pissed. Nor are you getting into my bed. Good night.”
Feeling happy with my retort, I saunter towards the stairs. Behind me, Evan impersonates my sentence with an exaggerated posh accent.
It’s a good thing that I’m sober otherwise I’d go back there and punch him.

AUTHOR INTERVIEW QUESTIONS
Where did you grow up?
I was born in the UK and I grew up in Europe, travelling around with my military family. Most of the time I lived in the UK and Germany.

Where do you live now?
Perth, Western Australia.

If you could live anywhere, where would you choose?
Perth!

How long have you been writing?
Since I was 8 years old when I had a poem published in the local newspaper. Last year, I decided it was time I tried to find a publisher!

Where did you get the inspiration for ‘Because of Lucy’?
I love the new adult genre - being able to write about the time of self-discovery that comes  from moving away from family influences and into adulthood. I wanted to show the struggle that people often have at this age when trying to forge an identity outside of the one that they may have unwillingly been molded into.
I love hidden secrets in books, but only ones which keep the reader guessing. When I was half way through the first draft, I tested the story on a friend. If she’d guessed who Lucy was before she was revealed, I would have scrapped the book!

Do you have any pets?
A Weimaraner named Tilly who is not the brightest of dogs. She does a great impression of a Weeping Angel (geek reference!). We also have a cat called Twinkle but, as all cat owners know, we’re her pets.

Something about you not many people know?
Until I moved to Australia, I had never lived in one house longer than two years or one city longer than three. Eight years later, I don’t want to move again!

Who would you cast as actors if a movie was made of your book?
I always find this question tricky because every reader has their own pictures in their heads of who the characters look like. When I started writing Because of Lucy I was watching Supernatural a lot and Evan looked a little like a younger Jared Padalecki in my mind. But not as tall! Ness is more difficult - maybe I don’t pay enough attention to female actresses lol.

If you were a cartoon character who would you be and why?
Lisa Simpson. Because I was a little like her when I was younger (and we share a first name and initials!)

What is your next project?
I’m currently finishing the third book in my paranormal romance series, Soul Ties. I have also started writing a second book featuring Ness and Evan. Because of Lucy was going to be a standalone as it has no cliffhanger and a happy ending, but readers have asked to follow more of Ness and Evan’s story. And I’m happy to do that because...more time with Evan! 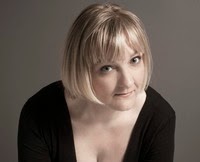 Lisa was born in the UK and she moved around Europe with her military family before completing a BA (Hons) in English at the University of Leeds. Her home is now in Perth, Australia with her husband and three children.

In between running her home based craft supplies business, looking after her family, and writing, Lisa sometimes finds spare time to do other things. This often involves swapping her book worlds for gaming worlds. She even leaves the house occasionally, enjoying walks with her dog and time with her family. She loves all things from the Whedonverse and preferred vampires before they sparkled.

For a chance to win an ecopy of Lisa Swallow's "Because of Lucy" leave a blog post comment telling me your answer to the question: If you were a cartoon character who would you be and why?