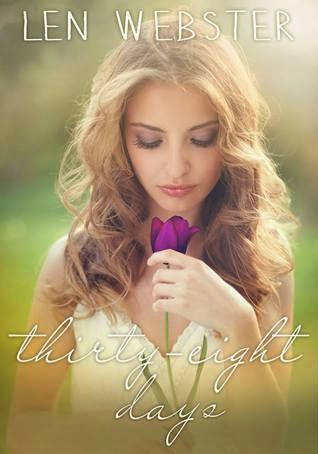 Every storm has a beginning, every storm has a perfect moment of bliss and every storm has a destructive end.                                       -Thirty-Eight Days
SYNOPSIS: Nolan Parker and Clara Lawrence never saw eye to eye. In fact, if you asked Clara she would tell you that Nolan Parker hated every thing about her. They never shared any form of connection besides Alex Lawrence.
She was Alex’s bratty sister and he was Alex’s best friend, they never stood a chance.
Five years have passed and almost 12,000 miles have kept them separated, both living completely different lives. Unchanged perceptions and expectations should have kept them apart but when Nolan returns, the foundations of their ‘relationship’ is sure to change.Their story was meant to end the day Nolan left for Stanford. But what if seeing each other after five years was the game changer? What if this was their one chance to rewrite their relationship or were they always destined to never be more?


“If I had everything I ever wanted, I’d have you. But I don’t.”
♥
EXCERPT: Reaching the balcony to close the doors, he found Clara leaning over the rail, her back towards him. He watched as her dress and her hair flew with the wind. He was sure she was cold, because he could feel the cold pricks hit his own naked chest. Noel walked over to her, wrapping his arms around her waist and settling his chin on Clara’s shoulders. Clara didn't resist his touch, and he was hoping he was transferring his body heat to her.


“I’m sorry. I didn’t wake you, did I?” she asked softly as she turned her head slightly to meet his. Clara placed a kiss on his cheek and moved herself closer into Noel’s embrace.
“No, I just woke and saw you were gone.”
“I just needed some fresh air,” she sighed out.
“Are you sure that’s all you needed?” he asked. Clara tensed in his hold.
“What do you mean?”
Noel let out a heavy groan. Clara spun in his arms and faced him, her hands on his chest.
“Noel, tell me what you mean?”
“If you want space, Clara, I’m willing to give it to you. If you think this is going too fast, then I’m willing to wait by the barracks. But don’t run from me, please,” he quietly begged as he moved her hair out of her face. Clara’s face turned bleak.
“Is that question number four?” Her eyes looked at his chest. Earlier in the night her lips made his question nonexistent.
“No, question four was… if this was something you wanted? Do you really want an us?” he asked. His heart squeezing at the thought of the possible rejection that he was facing. Her eyes made their way up until he was staring right into those golden pools of uncertainty.
“I–I,” she stuttered for a second before she closed her eyes and composed herself.
“I want an us. I promise you, Noel, that’s what I want,” she said as she raised her hand to his cheek and resting it there. He felt his heart being consumed by relief.
But what about Liam…
“Question number five, is it me you really want?”
“Where is this all coming from?” The wind picked up and Noel felt Clara shiver against him. He brought her closer to his body and held her against the railing.
“I just want you to be sure, that’s all,” he confessed. The nerves in him increasing but he was able to compose himself enough to wait for her to speak.
“I am unbelievably sure. I mean, this between us is a little crazy, and maybe even a little unconventional, but I’m sure I want you. In fact, I’ve never been more sure in my life.”
LINKS: Goodreads / Facebook / Wattpad / Smashwords / Twitter

“Every minute of every day that I’ve spent with you; you completely changed me. I see, feel, and even breathe differently now that I'm with you. I don’t deserve you, but I promise, I’ll do what it takes to make you happy. I don’t ever want to hurt you again.”
♥
I think it was the moment I first laid eyes on you that I started to fall in love with you. But the stupid idiot in me tried to deny myself of this feeling.
at June 03, 2014