She’s supposed to be a mission—just the next sacrificial lamb in his century-long quest to rid himself of his duty. But when love takes hold, things are never simple….
All-powerful warlock, Finn Holt, is determined to succeed this time with the fifth Fated—the girl chosen to power his world and open the gate back home. After a century of failure, he believes River is finally one strong enough to allow him to fulfil his duty. But the price could be her life. And, this time, everything is different. For one thing, her power is immeasurable. The most shocking thing of all, though? She’s under his skin. Finn is a master of control, but as much as he tries to shake his growing feelings and desire for her, he can’t. Some inexplicable force won’t allow it. But is Finn prepared to give up the freedom he’s wanted for so long, for a love he never saw coming? River Slater is sick of wasting away her life in a boring, dead-end town. The moment Finn walks into her grandmother’s occult store, all that changes. Before she knows it, she’s caught up in a world she’d never believed existed: a world of magic and danger. But, most of all, she’s caught up in Finn. Her attraction to him is unlike anything she’s ever felt for any man before. Intense. Passionate. Overwhelming. But she quickly learns that there’s more to Finn’s intentions than meets the eye. Can she truly trust him, or will the man who’s stolen her heart, end up betraying her in the most tragic way? 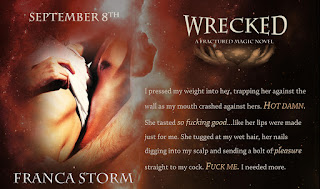 Son of a bitch!

Okay, I just needed to get a grip. It was business. Just business. I’d help her, but keep it clinical and nothing else. After all, I needed her to trust me. And, after her grandmother had warned her off me, I had my work cut out for me more than I should’ve. So, this would go a long way to fixing that shit.

I pried her fingers from my wrist and took a step back. Turning from her, but staying beside the bed, I commanded, “Take off your clothes.”

She murmured something that I couldn’t make out. I knew she wasn’t really with it. She was still in shock and the power drain could have that effect, too. The other reason I knew she was out of it? When I’d walked into that occult store, the first thing I’d felt from her was her strength. Not magical strength. No, her inner strength. The girl was tough. And right now, that wasn’t the case.

“Finn?” she called, ripping me from my thoughts.

“Yeah?” I said over my shoulder.

“You under the covers?”

“All right.” I turned back to her and pulled off my black t-shirt. Her gasp startled me and my gaze snapped to hers. Her eyes were all over me; sparkling with awe. I couldn’t tell whether she was checking me out just cuz my chest was bare, or if it was the markings covering the length of both my arms and across my upper chest and back.

She just nodded and didn’t press it. Phew.

I looked away and toed off my shoes. It pissed me off that I was doing this without magic—the long assed way—but I didn’t wanna freak her out any more than she’d already been tonight, so I was keeping it normal and avoiding overt displays of magic. I pulled off my jeans until I was down to my boxers. As I approached the bed, I saw her eyes dart right there, checking out my dick.

I cleared my throat loudly and she looked away embarrassed. Thank fuck. Having her eyes on me like that was…difficult. 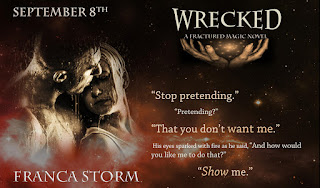 Witches, warlocks, sorcerers, and vampires...Oh my! Wrecked is a tale of action, suspense, intrigue and magic. As a reader, I am ashamed to say that I do not read as much fantasy that I would like to, but when I read the blurb for Wrecked, something called out to me. As I began the book, I found myself utterly captivated by Storm's words and the magic that inhibited the pages.

River is living a boring existence as she spends day after day working at her grandmother's occult shop when Finn walks into her life. Finn is a sexy alpha and is a very powerful warlock come to claim River for her destiny to be complete.

Finn and River end up in a whirlwind relationship and yet there is just something so incredibly right about the two of them together. Both Finn and River are absolutely incredible characters that draw you to them from the beginning. Storm does a wonderful job describing these characters so that you can get a clear image of them and who they are.

The plot is captivating and overall Wrecked is a beautifully written paranormal romance that kept me interested from beginning to end. 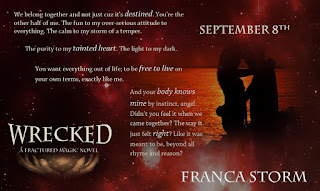 Franca was born in Surrey, England and currently lives in Niagara Falls, Canada with her husband and their labrador, Rocky. She is a long-time lover of erotica and romance novels, especially those with sexy-as-sin alpha males. She decided to try her hand at writing her own and writing romance is now her obsession and the perfect way to put her dirty mind to good use! Her writing spans many different sub-genres of romance: contemporary, biker romance, paranormal romance, new adult, romantic erotica and romance suspense. She’s got a ton of stories to tell and many more works up her sleeve.

a Rafflecopter giveaway
at September 21, 2015