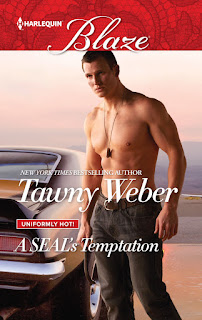 Subject: Navy SEAL Shane "Scavenger" O'Brian Mission: Seduce and satisfy Lark Sommers! Lark Sommers's dry spell is officially a sex-starved desert. Since taking over her mom's quirky coffee shop in Nowhere, Idaho—putting her own career on permanent hold—Lark's been, well, miserable. But her friends have a plan…one that starts with a superhot guy with a rockin' hard bod. US Navy SEAL Shane O'Brian has no clue he's being set up. All he knows is that Lark does incredible things to his libido. Still, Shane can't quite bring himself to tell her what he does for a living. After all, their risqué business is temporary—no strings, no falling in love. Especially when there's no way this SEAL would ever be tempted into anything more than a sexy little fling…

In A SEAL's Temptation we get the story of Shane and Lark. Both from the same hometown, Shane and Lark meet when Shane goes home to help celebrate his sister's birthday he meets Lark, his sister's best friend. Lark is immediately off limits due to her connection to Shane's sister and yet both Shane and Lark find each other impossibly attracted to one another. Both are carrying baggage - Lark is grieving her mother's death while Shane has a strained relationship with his mother due to the fact she doesn't want him to be in the military. Can Lark accept the danger of being with a SEAL?

A SEAL's Temptation is an engaging, quick and fun read. I really enjoyed the storyline and both Shane and Lark's characters. Tawny never fails to keep things not only interesting but HOT and succeeds at both yet again with A SEAL's Temptation.

From the moment I began the book, I was intrigued. There were moments of pain and heartache but there was also love and laughter. I loved A SEAL's Temptation in it's entirety and hated to say goodbye to Shane and Lark after the last page was turned.

I highly recommend this read and if you haven't read Tawny's previous books, pick them up too! You won't regret it! ;)