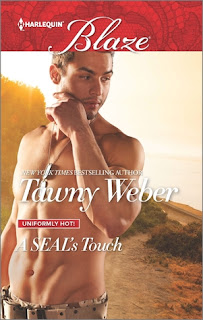 Title: A SEAL's Touch
Author: Tawny Weber
Published: January 19, 2016
Genre: Contemporary Romance, Military
Purchase: Amazon
Add to Goodreads
Source: I received an ARC of this book from the author in exchange for an HONEST review.

Subject: Navy SEAL Taylor Powell
Mission: Find a sexy fake girlfriend…with even sexier benefits!
Lieutenant Taylor “The Wizard” Powell has a reputation for getting out of tricky situations. Bad guys, bombs, weapons—no problem. Finding a girlfriend in order to evade matchmaking friends? Not so easy. He’s banking on contractor Cat Peres to help him out…not realizing his tomboy friend has a whole lot of sexy surprises hidden in her tool belt.
Cat can’t remember a time when Taylor wasn’t the object of her hottest dreams—so she can’t help but agree to his plan. Their only rule? Friends, no matter what. Except the deliciously hot chemistry that ignites between them takes them both by surprise…and having nothing between them might just ruin everything.

My Review
It's no secret that I absolutely love Tawny Weber's books and her way with words. When I first became an avid reader of military romance, Weber was one of the first authors I discovered who wrote it and thus began my love with all things Tawny and military romance. The way that Weber can draw a reader in with her words, her imagination, and the suspense, is magical.

With each new release I think "Oh, this is my favorite of hers." and yet each time she proves me wrong, because I fall even more in love with the next book than the last. I fall in love with the characters, the plot, the romance, and the suspense. Tawny's guys aren't your average guys. No sir. These men are hardened and rough. These men are SEALS. And while I love my real life Marine, I am a sucker for a SEAL (Sorry babe!)

One of my favorite things about A SEAL's Touch is the friends to lovers story line. Taylor and Cat have known one another since they were little and Cat even had a crush on Taylor growing up. When Taylor's friends decide that Taylor needs a girlfriend in his life, Taylor decides to figure out a way to throw them off course and thus begins his fake relationship with Cat. The problem with this is that lines always become blurred and even though Taylor and Cat start off as just friends, feelings and lust begin to creep in.

The attraction between Cat and Taylor is off the charts hot and I can honestly think this is Tawny's best pairing come to life. The chemistry with this couple is natural, but smoking and each one of them is so likable, but together...wowza!

If you are looking for a great and steamy romance, this one is perfect for you!

NOTE: While this is the 10th book in the Uniformly Hot series, it can be read as a standalone...But if you are anything like me, you will end up binge reading all the previous books as I did the first time I picked up a book by this author.