Book Blitz: This Much is True Katherine Owen 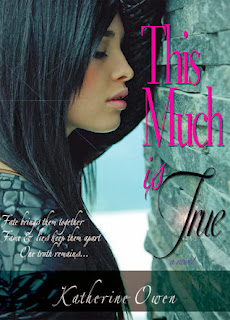 SYNOPSIS:
Fate brings them togetherFame & lies keep them apartOne truth remains…She’s become the Paly High girl with the most tragic story…At 17, Tally Landon just wants to graduate and leave for New York to pursue ballet. Her best friend Marla convinces her to attend one last party—a college party—where she can be among strangers and evade the whisperings about her heartbreaking loss of her twin that follows her everywhere she goes. She meets Lincoln Presley, Stanford’s famous baseball wonder and has a little fun at his expense—when she lies about her age and who she really is—intent on being someone else for the night and escaping her tragic story.His only focus is baseball, but he can’t forget the girl he saved on Valentine’s Day…At 22, Lincoln Presley’s star is on the rise—about to finish at Stanford and expected to be taken early in Major League Baseball’s upcoming draft—his cousin’s party serves as a welcome distraction. But then, he sees the girl from Valentine’s Day that he saved from that horrific car accident and can’t quite hide his disappointment when she appears to look right through him and not remember him at all. He vows to learn her name at least before he leaves. What’s the harm in getting to know this girl? What’s the worst that can happen?They share this incredible connection, but fate soon tests these star-crossed lovers in all kinds of ways…And yet, despite the lies being told to protect the other, and the trappings of fame that continually separate them, and in lieu of the deception by those they’ve come to trust the most; one truth remains.This much is true.

Tell about yourself; who ARE you? 
Dark. Edgy. Contemporary. Romantic.

Were we describing me? Or my fiction? Sorry. I drink too much...coffee, not enough water.

I swear too much for God and my mother, and I slip these into my fiction. Sorry.

I'm impatient, a perfectionist, a wordsmith, a dreamer, which ends up being good and bad. I'm a workaholic; ask my fam-dam-ily.

I've written four novels in as many years: Seeing Julia, Not To Us, When I See You, and my latest release This Much Is True.

If you love angsty, unpredictable love stories, I'm yours. ♥

Give us the short version for This Much Is True
A challenge right away because this is a long novel (432 pages in print).
Fate brings them together
Fame & lies keep them apart
One truth remains…

She’s become the Paly High girl with the most tragic story…
His only focus is baseball, but he can’t forget the girl he saved on Valentine’s Day…
They share this incredible connection, but fate soon tests these star-crossed lovers in all kinds of ways...
And yet, despite the lies being told to protect the other, and the trappings of fame that continually separate them, and in lieu of the deception by those they’ve come to trust the most; one truth remains.
This much is true.

Where does the story come from?
I’d been taking classes with The Writer’s Studio a few years ago and this novel developed from a two-page assignment we did for one of my advanced fiction classes. Tally Landon evolved over time. Lincoln Presley was set in my mind from the beginning as this star athlete on the verge of fame and the girl he meets who mirrors his dedication and intensity in her own right for her artistic talent. And yet, their passion tests them both in different ways along with everything else that transpires in the story.

How is this a story that only you could have written?
I created this entire story in my mind. I started out with the what-if questions.  What if you had everything? Or thought you did and then life happened and changed up everything in a single instant? This happens to both of these characters in different ways more than once. One of the things that I came to realize with this novel—my fourth one—in which I think I finally got it—my process—is that I live and breathe with these characters for so long that I really do know them by the time I’ve completed the story. It’s true. I know how they would say things and think about them and what they would and would not do. It’s uncanny. When I’m finished, I miss all these characters because they’ve been such an active part of my psyche for so long. This story took a year and a half to write. I’m pretty sure my writing process drives my family crazy because I am in another world much of the time while writing and thinking through the story line.  So? Who else could have written it when it comes together like that?

What was the hardest thing about writing This Much Is True?
I battled a lot of self-doubt with this one. I thought writing When I See You was hard but This Much Is True was harder still. Part of it is me with some noticeable perfectionist tendencies. I put pressure on myself to ensure the story was better than my last which WISY was pretty damn good and my readers were anxiously awaiting another book and I still wasn’t done with This Much Is True. The story was going long and I debated upon doing two books which would have been the easy way out but I really felt committed to telling their whole story in one. So it’s two books in one, literally. Still the other day one of my newest readers on Goodreads took a star off of her 5-star rating of TMIT because she wanted a longer ending. It’s 432 pages already; go figure that one out.

What do you LOVE about This Much Is True?
This is a great story. It has everything in it from the coming of age angle with Tally starting out at seventeen to the older amazingly talented baseball player in Lincoln Presley and these two confronting and battling the trappings of fame and lies and what love is really all about. It’s a masochist read as one reviewer put it. The truth is I’ve had some AMAZING reader reactions to this book that have put me in tears because they get me and this book. It is the ultimate gratifying experience for this author, let me tell you.

Give us your favorite passage from the story:
I love this one because it is the epitome of Tally and what she struggles with within herself…

Tally Landon’s POV
Marla announces she wants babies. Three babies in five years. She looks at me. I start to feel nauseous and must turn a little white. I look away from her and allow myself to think all these nasty thoughts. Three babies in five years with Charlie? Are you fucking kidding me? That doesn’t add up on any girl’s wish list. Charlie Masterson. A father? Say it isn’t so.

Yet she lays out this family plan the way you’d say, “After yoga, I’ll go to Lia’s for the mani-special and then wax on about hairstyles and hemlines until dinner.”

If I were gifted at making long-term plans, which by now we all know I’m not, and if I was at all hopeful, which we all know that I can never be, although it crosses my mind that it’s entirely possible these are all just huge, fucking, temporary setbacks and nothing more, even though it’s been going on for over three years now, since Holly died, and I met Lincoln Presley. Events that could be construed as somehow inevitably related. Yes, perhaps there’s an expiration date on the said pursuit of unhappiness. Perhaps, things will eventually go my way after I actually discover what that way is supposed to be.

And this one because it is the epitome of Lincoln Presley and my writing of him.
Lincoln Presley’s POV
Yet, in the light of day, at half past eight, all I have left of her is this note. Her fucking note. A note that doesn’t tell me anything and simply thanks me. Thanks me. She didn’t even sign her name. For some reason, this bothers me on a whole separate level. I stand still for a long time, holding the note, and let it all sink in. Her leaving is almost palpable like a gale-force wind that’s rolled into my life in the span of a single evening and left behind all this incalculable destruction, both inside and out. Yes, the tempest has passed, but the air around me feels different. I can hardly breathe. Nothing is the same without her. As the lone survivor of her particular storm, I begin to wonder just exactly what I’m supposed to do now.

It’s only later, after wandering listlessly around the guest house for another hour, after I eventually resign myself to the unenviable task of cleaning everything up and throwing away the empty champagne bottle we shared; after I wash the wine glass smudged with her lipstick; after I purposefully pick up and look through each and every one of the DVDs she touched and so casually left in a forsaken heap stacked precariously at the edge of the great room rug so clearly forgotten by her, which seemingly represents this wry reflection of myself that even I can admit to; it’s only after I pushed the heavy furniture pieces back into place and, in essence, effectively erase all genuine evidence of her incredible presence from the night before; yes, only after all of that, do I realize I have absolutely no way to get in touch with her.

I’m practically paralyzed with equal doses of disappointment and despair at the cruelty of this one indelible fact. Yes, this hits me hard because I want to see her again, need to see her again; and yet, I have no way to get in touch with her. I begin to wonder if that was her intention with me all along.

What’s next for you as a writer?
I have two different WIPs going on in my mind competing for thoughts and time. Saving Valentines which I hope to finish by the end of the year and another yet-to-be-named WIP that is about four girls graduating from high school and reuniting years later and seeing the unexpected changes in all of them and how tragedy unites them, changes them and threatens to tear them apart in different ways. All complex stuff told from multiple POVs and gender. Damn. Why do I come up with this stuff?